← Letter from Camp
Confessions of a Trip Leader → 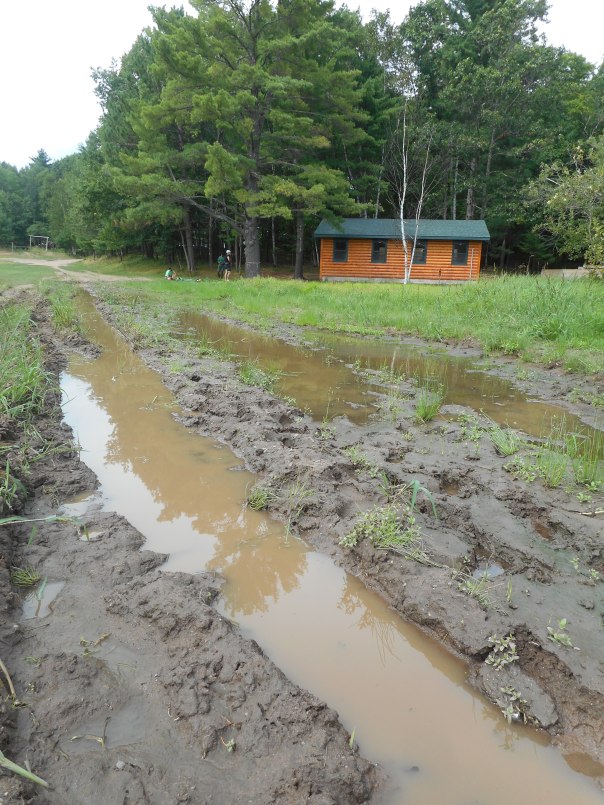 Near where I live, an outbuilding was raised this summer. Down a gravel road then along a sandy two-track, the building stands new and distinct in a recent clearing in the woods. Earlier this summer construction vehicles often came and went, their heavy treads leaving a growing impression upon the sandy-clay soil. Spring rains had raised the water table and kept the soil saturated, making the soil easily molded by the tracks of heavy machinery. Every vehicular pass widened the quaint two-track until all the median vegetation was turned under and the ruts grew deep and muddy. Spring storms sent water flowing into the new depression; it was the genesis of a mud puddle.

I had walked past this puddle frequently during the summer. Always skirting around its edge, I never wanted to risk fully submerging my feet into the murky depths. Though it could feasibly be jumped across at places, it took fifty paces to walk entirely around. Getting too close to the edge was always risky. The waterlogged soil around the perimeter was slick and muddy; one careless step would result in a drenched shoe. Regardless, the dampness of the puddle oozed up into each visitor’s footwear, whether they were careful or not. How deep the puddle was I never found out. Its opaque muddy waters kept the true depth from me. There must be a bottom somewhere, but it was never for my pair of sneakers to find out where.

With the outbuilding having been finished, the rumble of construction traffic stopped mid-summer. The giant mud puddle remained, now undisturbed by track or tire. Only footprints troubled the new body of water. The hot July sun did its best to transform the lowly puddle into a series of dusty ruts, but continual summer storms provided aquatic sustenance. The puddle’s existence continued indefinitely.

A few weeks passed since the times I walked by the fledgling puddle in early summer. I remembered the puddle’s brown murkiness and the primordial look of its oozing mud. Yet, as I meandered past once again, I was drawn in closer. A sudden burst of movement caught the corner of my eye. Curiosity overcame me. In childlike wonder I stooped down to investigate what happened. A bullfrog had jumped into the mud shallows. Disturbed by my movement, the frog sought shelter in the puddle’s depths. The bullfrog now sat still, wary of any movement, its eyes poking just above the waterline. In my brief observational absence, the lowly mud wallow had been transformed. The lifeless ooze had changed into a thriving ecosystem all its own.

I continued to stand and watch closer. The longer I squatted and the stiller I stayed, the more movement caught my eye. Fat black blobs swam lazily in the brown water. These were tadpoles, the maturing progeny of the bullfrogs. Had the current generation of frogs been born in this puddle? Perhaps, but maybe the current bullfrog residents had moved in and lain their young there, staking the first pioneering claims to the new habitat.  Elsewhere, more black dots darted quickly below the surface of the water, stopping as rapidly as they had started. With two long oar-like legs attached to an elliptical body, these are insects known as backswimmers. They have likely flown in from similar habitat in a nearby swamp. Aquatic predators, the backswimmers indicate the presence of prey species in the puddle, some of which are too small to see. In this short amount of time, a food chain has been developed in the puddle.

The formerly impenetrable murkiness of the water had also begun to clear. Slowly, sediment had settled and the opaque brown became semi-translucent. The water still appeared brown from the muddy bottom, but light now penetrated deeper down. Mats of algae now lay revealed floating in the water. Intricate, delicate; curvy, lacy folds of blue-green. Still waters had allowed algae to grow. Their spores—have they come from a proximal swamp? Were they blown in from afar? Had the spores lain dormant on the dusty road, just waiting for the rains to come again? Algal life now flourished in the mud puddle, serving as the primary producer—the energetic foundation of the new ecosystem. Elsewhere, blades of grass had started poking up from the mud. Likely remnants of the former median vegetation, the rhizomes of the grass had survived dormancy under the mud, now sending new shoots skyward to catch the sun. The inundation of the puddle had slowly decreased enough that lengthy miniature islands had begun appearing in the terrain. These new spots of land remained moist, the perfect germinating spot for colonizing plants. Ruderal species—common roadside weeds—had begun to sprout up around the puddle. In time, these plants will fill in the disturbed soil; the mud being inevitably covered up in a blanket of green.

Where had the abundance of this mud puddle even come from? Until recently, this stretch of road was a dry dirt two-track. Now, this simple mud puddle, along the lonesome two-track road, had turned into a sonata of life. It had grown into an ecosystem of its own right, a microcosm of all life itself. What will happen to the inhabitants of the mud puddle at the end of the summer? Will intermittent rains continue to feed its life? Or will the hot August sun desiccate the puddle and all creatures within? Next year, after a long and cold winter, will the puddle still remain? Or is it really just ephemeral, making only a brief temporal appearance when summer rains come down heavier than usual? In ecology, the process of change is continual. Entire ecosystems may come and go based on such a small thing as a depression to collect water. What will be the fate of the mud puddle ecosystem? Only time will tell.

← Letter from Camp
Confessions of a Trip Leader →