← Barn Raising on the River
The Land of the Free (Museums) → 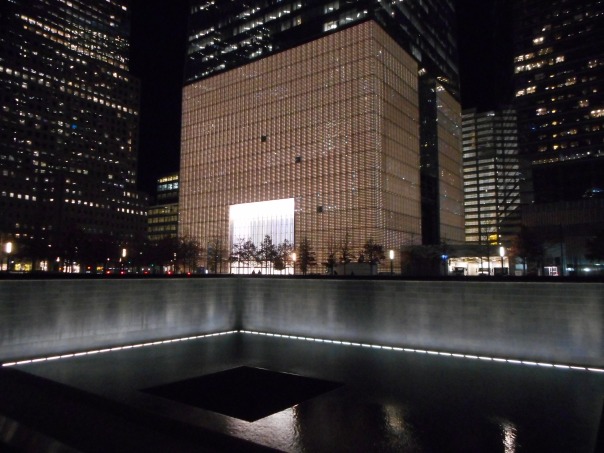 On my last day in New York City, I made sure to venture to Manhattan’s downtown financial district on a pilgrimage to Ground Zero—the site of the terrorist attacks of September 11, 2001. It’s been over fifteen years now since that fateful September morning, but I can still recall witnessing the events live on television. The attacks of that day shook America and signaled the beginning of a different era. The events that took place in those city blocks in lower Manhattan are likely to be the defining event of my generation’s lifetime. I had to visit.

As I walked south to the 9/11 memorial, I stopped at a small park between Broadway and Greenwich Streets. Here, in this small triangle of land, an office building once stood that was destroyed in the attacks. Having already taken my first glimpses of the immense Freedom Tower and the other hi-rise redevelopments along the way, I stopped in the park to have lunch. The scene I witnessed at the park was something that could have come nearly anywhere out of New York City. People in business casual rushed about, tourists ambled around cameras in hand, stop-and-go traffic rolled by.

My attention was drawn to a group of students eating lunch in the park. The students were young, maybe fourth grade, but around the same age I was when the attacks happened. These students sat energetically on the benches, chatting and frolicking as they ate the way you’d expect any group of elementary students to do. The gravity which I felt at visiting the memorial was not shared by these students. Theirs was a normal day—better yet, a field trip day to be excited about.

When I was an 11 year-old fifth grader in 2001, I could sense the seriousness of the situation that was unfolding. I was old enough to know that a national tragedy was in progress. I could know enough that this day more so than others would shape the character of the future.

Yet do the grade-schoolers in the triangular park know what that day had changed? Their entire lives have occurred after that day. Have they grown up knowing that there was ever anything different?

Then I thought about what September 11 had changed for me. I was a child then. I did not know the world as I know it now. But I can tell that our culture has shifted to place a much higher value on security than freedom. Visiting the 9/11 Museum, I expected nothing less than a full security screening—symbolic of how our standard cultural expectations of what’s acceptable have changed. But I don’t expect such intense security measures to get into the visitor center of the Charlestown Naval Yard in Boston. Fifteen years later and our culture still clings to quixotic measures of security. As a culture, we’ve taken a default of viewing people as a threat. On that September day, a part of our liberty died that has never recovered.

As I continued to eat my lunch in the park, I kept thinking of those students. The normalcy of their interactions struck me. Their daily life didn’t seem much to be directly affected by the attacks. Elsewhere, the resilient people of New York have recovered and continue hurriedly about their business. Ground Zero, once devastated, has been rebuilt with gleaming towers beaming into the sky. Large promotional posters gawk about the experience of going up to the observatory at the top of the Freedom Tower. The cultural and economic powerhouse that is New York City lets no opportunity for commerce go to waste due to an air of sentimentality. The hum of city life honors the living while the nearby memorial pays tribute to the dead. 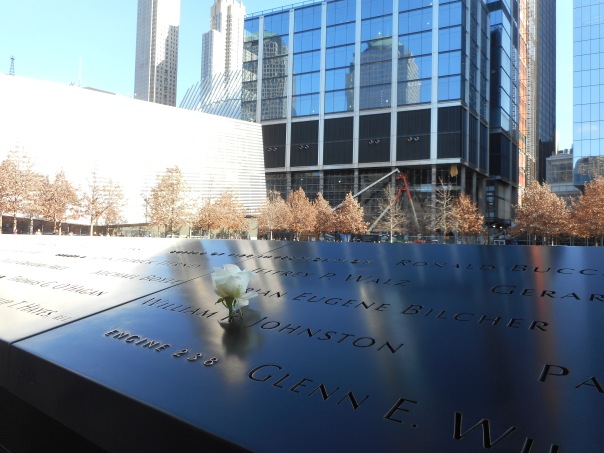 Posted on December 5, 2016, in Reflection and tagged 9/11, America, National Security. Bookmark the permalink. Leave a comment.

← Barn Raising on the River
The Land of the Free (Museums) →