Turkeys in the Rain

“Turkeys in the rain and they don’t complain, they just graze in the field with the cattle in the mist”

Seth Bernard and May Erlewine, from “Turkeys in the Rain”

Springtime has been coming on gradually in Cape Cod, with slowly warming temperatures as the amount of daylight steadily lengthens. Cool spring rains fall across the landscape as the deciduous trees burst forth their buds into new foliage and flowers. The fauna, long-since arisen from their winter torpor, are milling about their animal business. The cyclical change into springtime causes a hormonal shift and serves as a trigger for much animal behavior; for some, the breeding season is nigh and is fraught with activity. Listen closely. All around the Cape, you may hear the familiar fowl and its iconic gobble as it struts showily about. Yes, both field and forest are alive with a rafter of turkeys (indeed, that is the correct name for a group of turkeys, derived from the antiquated use of the word ‘raft’ as a motley collection of things). After a long winter living in groups separated by sex, the male and female turkeys start to mingle and commence their rituals of courtship. It is quite a show to bear witness.

The turkeys go about their labors, indifferent to rain or shine. The hens, the more pragmatic of the sexes, spend their time foraging about for food. The toms, preoccupied with vanity, fluff out their showy plumage and strut about for the ladies. The frequent rain doesn’t dampen their spirits—they continue on as they had, indifferent without complaints. Nor, as urban legend may have it, do they stare up at a raining sky, mouths agape, until they drown (actually, with eyes on the side of their heads, turkeys would need to tilt their heads sideways in order to view the sky). Neither do the turkeys seem to mind human observers; instead of being frightened by human encroachment, the turkeys merely seem more annoyed with the distraction. The hens, being more vigilant, are the more likely party to move if a visitor gets too close; the toms (also known as gobblers)—well, they still seem a little preoccupied with other matters.

Any given morning during mating season you will hear their distinctive call resounding. The comical gobble-gobble-gobbles of the turkeys pierce through the chirping din of the petite songbirds to dominate the avian conversation. Though the call may sound silly to our own human ears, the gobbling is nothing short of a serious business. With each call, the toms try to attract a mate, and their gobble is one of the criteria upon which they will be judged. Their plumage and showmanship are other vital categories in this talent show. Unlike the drab brown females, the toms are bedazzled with ornate patterns of plumage—stripes and streaks, lights and darks, mottles and dapples. They fluff out their feathers as they strut about their courtship dance, becoming the stereotypical turkey in every grade-schooler art project. Their bald heads and their hanging wattles, in varying shades of red and blue, add to their sexual appeal. On the top of their beaks hangs their snood, a fleshy protuberance that engorges with blood and expands, signaling both the prestige and attractiveness of the mate. The toms’ courtship walk about the fields is reminiscent of the dinosaurs, deliberately stepping about. For all the effort that went into this display, though, I wonder if the hens even care to notice the showmanship. 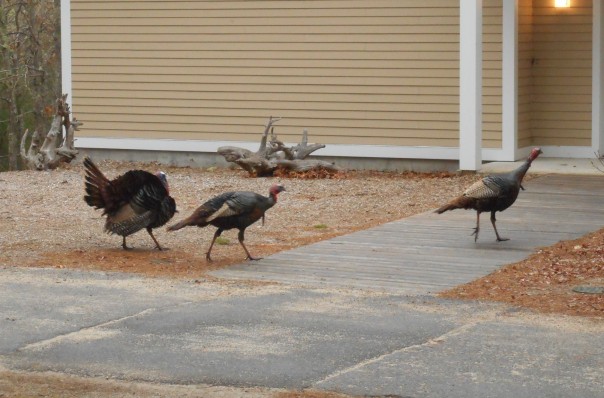 A rafter of toms

For all the pomp and ceremony that the males put into the show, the actual copulation is finished in a swift and inglorious manner. The hen, satisfied with the robustness of her mate, squats down for a quick fertilization. While the mating season is ongoing, the hens will gradually begin to break away from the co-mingled groups to create a nest—little more than a few shallow scratches in the ground under the protection of some dense brush. The hens will lay a few eggs before returning, once again, to the mating show for additional fertilizations. Once they have laid about a dozen eggs, the hens break out from the group entirely and begin the weeks-long period of continuous incubation. The eggs will hatch in June, bringing forth the next generation of poults to continue on with the show next springtime. The toms, as uncommitted as they ever were, re-form their bachelor groups and mill about in the forest. Their days will now be filled with re-establishing their pecking order for when the next mating season comes around.

As the evening fades into dusk, take a glance up into the trees. Maybe a frantic gobble from up above will give it away. The turkeys have taken to the trees to roost for the night. They prefer the stands of towering old white pines, where the branches are thick, straight, and long, and where the inner foliage of the trees is sparse. Up safely off terra firma, the turkeys can avoid their many ground predators as they rest through the night.  Though they are large heavy birds and look like a Thanksgiving dinner, turkeys are actually quite adept fliers. They can muscle their way up into the lower branches of a tree, where they will hop about from branch to branch continually climbing higher into the canopy. Look up and you may be lucky enough to catch the motion of them flying from branch to branch.

As you observe the wild turkeys here on Cape Cod, you may notice how abundant they seem to be. As in the days of the pilgrims, these plump birds casually roam the forest en masse. Turkeys haven’t always been so abundant though. With increasing settlement and more game-hunting in the eighteenth and nineteenth centuries, the number of wild turkeys dropped precipitously. Eventually the iconic fowls disappeared from Cape Cod altogether. In Massachusetts, the very state where Thanksgiving was first celebrated (and very likely served turkey) the last wild turkeys were extirpated in 1851. Only recently, were these charismatic birds reintroduced onto Cape Cod. In 1989, 18 wild turkeys were re-introduced onto the wilds of Cape Cod’s Otis Air Force Base, which lies just a few miles away from camp. If all the evidence points correctly, clearly the turkeys have taken off really well since then.

Posted on May 13, 2017, in Environment, Nature and tagged Cape Cod, Mating Season, Turkeys. Bookmark the permalink. Leave a comment.