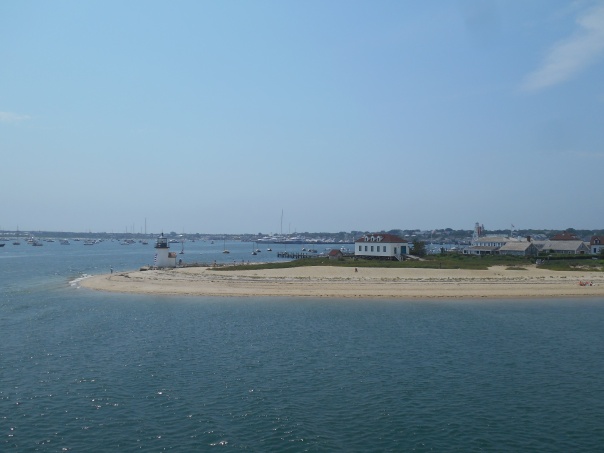 Rounding Brant Point at the shallow entrance to Nantucket Harbor

Thirty miles off the Northeastern seaboard of America lies a distant land, one that is removed to both time and mainstream American culture. On a clear day you can squint your eyes and barely make out the remote island over the horizon. The Wampanoag people, the ones who first inhabited these lands, named it ‘natockete’—the Faraway Land. Today, the island of Nantucket is easily accessible yet remains isolated by distance and culture; it remains the proverbial faraway land.

To get to Nantucket requires intention; no one ends up there on accident. The ferry ride from the mainland itself promotes the isolation, requiring over two hours to traverse the expansive Nantucket Sound. This distance and isolation has produced the distinct identity of the Nantucketer; native Nantucketers, when they seldom do go to the mainland, feel so removed from it that they refer to it as ‘going to America’. The island’s 48 square miles makes it insignificant in area, but the island makes up for its lack of size with its depth of character. Charming and quaint with its cobblestoned streets and rows of simple clapboard shanties, the Nantucket of today appears as an island forgotten in time. Yet, underneath this unassuming appearance lies a cosmopolitan society fueled by a multi-billion dollar tourism and real estate industry. Retreatants from all across the globe call this island a home, either permanently or seasonally. Yet, the island has resisted the global corporate commercialization seen on the mainland. There are no fast food restaurants here, and no superstores. The businesses and development on the island are unique and independent as the island and her inhabitants themselves. 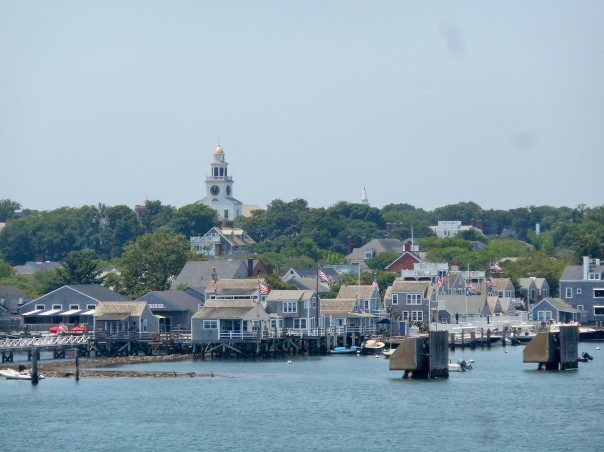 Nantucket town, with it’s modest buildings sheltered by street trees. The most dominant feature of the skyline is the Quaker Meetinghouse. Nantucket’s many wharves stretch into the harbor. 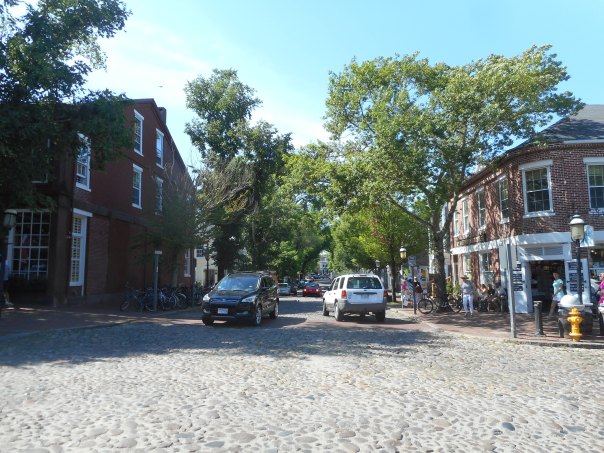 Main Street Nantucket: rustic and cobblestoned, yet modern and full of traffic.

In terms of natural resources, Nantucket itself has little to offer. The island is a relic of the last ice age, merely a pile of sand in the ocean dumped by a glacier some 20,000 years ago and continually sculpted away by the sea. Incessantly battered by the ocean, the natural environment of the island remains fragile and the blanket of ocean fog that often shrouds Nantucket has earned her the nickname ‘Grey Lady of the Sea’. Nevertheless, the cryptic island still supported much life, including a complex human culture. For thousands of years, the Wampanoag people lived sustainably on the island in small groups called sachems. Five to six thousand years ago, rising tides from glacial meltwater cut off Nantucket from Cape Cod for good, creating the isolation needed for the distinct cultural identity of the original Nantucketers to develop.

European settlers to the Massachusetts Colony, off-put by the island’s isolation and lack of resources, initially passed over the Grey Lady. Eventually, however, the island’s isolation proved an allure as well, and the earliest English settlers came in 1641 to seek a reprieve from economic and social oppression on the mainland. Those early settlers tried subsistence farming and grazing like they had known in their home country, but agriculture and livestock grazing proved unsustainable and dramatically changed Nantucket forever. The native vegetation was stripped from the landscape, and the already poor soil was lost. Looking to maintain their fragile existence, these early Nantucketers turned to the sea for their salvation. 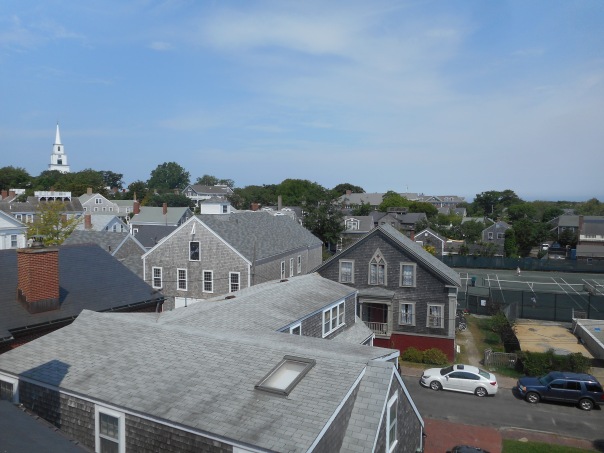 And the sea, though violent as it may be to the island itself, provided generously for the settlers of Nantucket. The coastal waters of the Atlantic were rich in fish resources, in turn supporting an abundance of whales. The ongoing industrial revolution created an insatiable demand for whale oil products, and Nantucket capitalized on its nautical location. Nantucket’s proximity to the sea, instead of the isolation due to it, provided an advantage as Nantucket reinvented itself as a whaling port. With the seas as the roads and the primary mode of transportation being sailing vessel in those days, even isolated settlements on the mainland were effectively islands at that time; being a physical island was not much more of a barrier. Though poor in natural resources, Nantucket could easily ship in whatever supplies they needed from the mainland—lumber, food, labor—all financed by the profits of the whale industry. By the mid-1700’s, Nantucket was a booming city with a population surpassing 8,000, as well as being the nationwide leader in whaling. Though awash in wealth from the whaling industry, the Quaker values of the Nantucket settlers shunned displays of opulence and prosperity. Instead, Nantucketers lived simply and constructed economical dwellings for themselves in a society subservient to both God and the whales. Astute businessmen, earnings from whaling were re-invested directly into the industry. 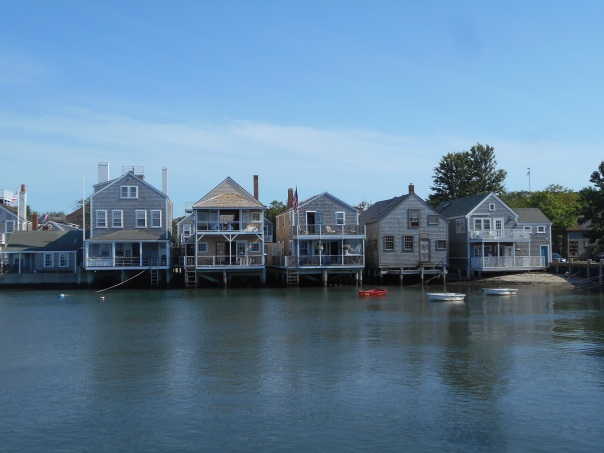 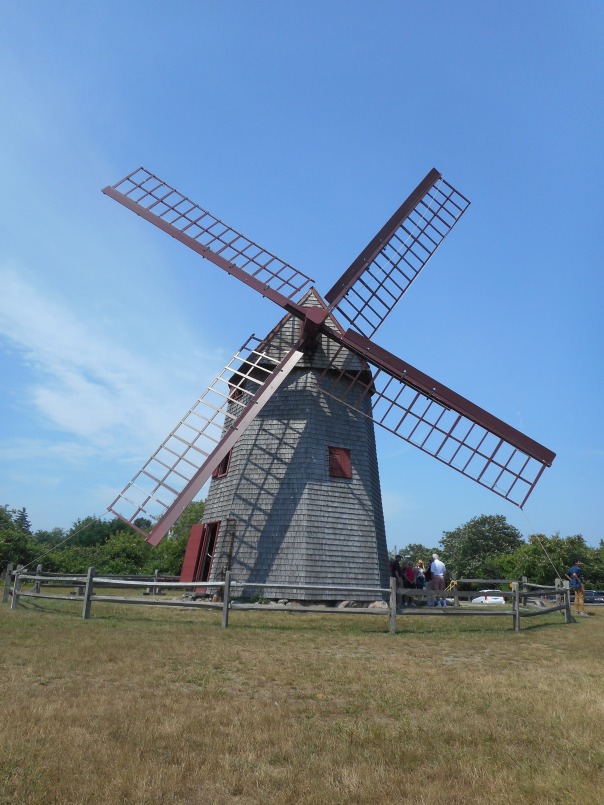 The Old Mill: built in 1746 as a way to grind corn meal for provisioning ships

Eventually, Nantucket’s isolation began to lead to the demise of the island community. The success and monopoly of whaling for Nantucketers meant that whaling was the only industry in town. Serving as a whaler was a rite of passage for the islanders, and an insular culture around whaling practices developed. Nantucket whalers were distrustful of technological advances and nautical knowledge from others off the island, even as the traditional whaling industry as they knew began to decline. The overhunting of whales in Nantucket’s backyard, the Atlantic, led to the development of the Pacific whale fishery. To accommodate for longer voyages, the whaleships grew larger and more technologically advanced, and the shallow sandbar at the entrance of Nantucket Harbor eventually prevented these larger boats from docking in the Harbor. As a symbolic tragedy of the demise of Nantucket whaling, in 1820 the Nantucket whaleship Essex was sunk in the Pacific by a sperm whale—the gruesome tragedy that would inspire the novel Moby Dick. By the mid-1800’s, the whaling industry in Nantucket was in its death throes. Nantucketers stubbornly continued whaling with diminishing returns while the deeper mainland harbor in New Bedford, Massachusetts, with access to rail transportation became deeply profitable. Nantucket’s status as an island had once again become a liability. The last whaleship sailed out of Nantucket in 1845. Then, in 1846, a fire on Nantucket destroyed 40 acres of the town. A great depression fell over the island.  With little economic opportunity left, the people of Nantucket began a mass exodus. The island’s population plummeted to under a third of its whaling peak. 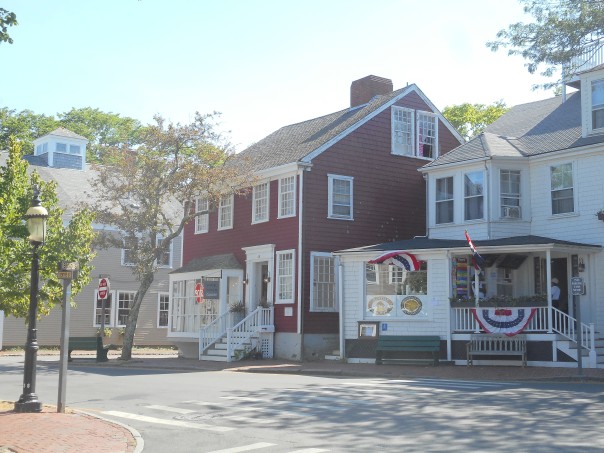 The red house was owned by whaling captain George Pollard, the captain of the ill-fated Essex voyage. Though they occupied the highest rank on the island, captains nevertheless built simple dwellings for themselves.

Nantucket Island would spend the next many decades unadorned and steeping in its isolation. Not until the turn of the 20th century did it see signs of revival as an island. In the roaring decades of the early 1900’s, artists and actors from the mainland began to turn to Nantucket for summer retreats. Lured by its quaint charm and rustic beauty, celebrities and wealthy businessmen alike sought refuge on the island. By the 1950’s Nantucket had become a popular enough retreat that developers saw the economic potential of a resort community. However, fearing the loss of the town’s character, great efforts were made to preserve the historic architecture and rustic charm of the island that had attracted vacationers there in the first place. Nantucketers, ever resistant of trends on the mainland, fought for the preservation of their island’s history and culture, resisting the post-WWII re-development and commercialization that was ongoing on the mainland and neighboring rival Martha’s Vineyard as well. Their efforts preserved the downtown core of Nantucket town and its outskirts, making it today the best-preserved pre-civil war era town in America.

Nantucket town today remains a maze of narrow streets densely populated with simple clapboard houses and sheltered by street trees. Main Street—the main commercial drag—is wide and cobblestoned, lined by old brick buildings, and leads straight down to Straight Wharf—one of the town’s many links to the sea. The sea is still the lifeblood of this island community, only today the harbor is frequented more by pleasure craft than by whaleboats. Outside of Nantucket town, the island is rural and rustic. Scraggly forests, instead of cookie-cutter suburbs, fill the isolated interior. On the fringes of the island, quaint shanty villages like ‘Sconset give off the forgotten seaside town aura. Today, more than 10,000 people call Nantucket home year-round, a number surpassing even the zenith of the whaling-era population. Though the island’s residents swell to over 50,000 in the brief summer months, the pace of life feels relaxed nonetheless. 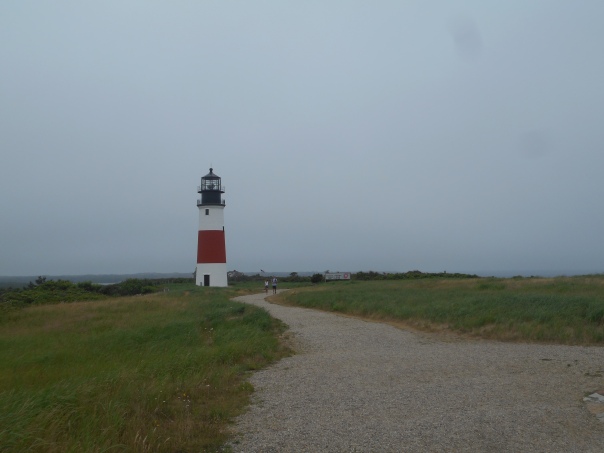 On the easternmost edge of Nantucket Island is the Sankaty Head Lighthouse. The waves continually erode away the island, forcing the relocation of the lighthouse in 1997.

I recently spent four days on Nantucket Island, exploring the island’s corners by bike. On a small island, there is nothing quite like exploration by bicycle, taking the slow route to the island’s fringes. Being on Nantucket, something inexpressible grips you. It’s a place you’ve been that’s like no other. Something on the island beckons you, drawing you in. Is it the salty air, the foggy mornings? Is it the predominance of the ocean, with the waves and the surf? Is it that the pace of life seems slower here? Unlike its rival island Martha’s Vineyard, there is not much human entertainment found on the island. Yet, in my time ashore, I found the days to be packed full of sights and sounds. The ocean beaches, the stars at night, they are the things that filled the time in all their gloriousness. Those four days seemed to stretch into an eternity yet flew by all too quickly.

Many people visit Nantucket each year, from all corners of the globe. The island—its mystique and aura—seems to leave an irreversible impression. Something about time spent on the island seems of a different caliber. For some, decades may pass between visits, yet Nantucket remains as a place near the surface of memory. The island always beckons you back. When you return, the enchantment of the island overpowers you once again. Nantucket whispers “forget about the mainland. Relax. Enjoy yourself. Linger for a spell, if only for this short while.” 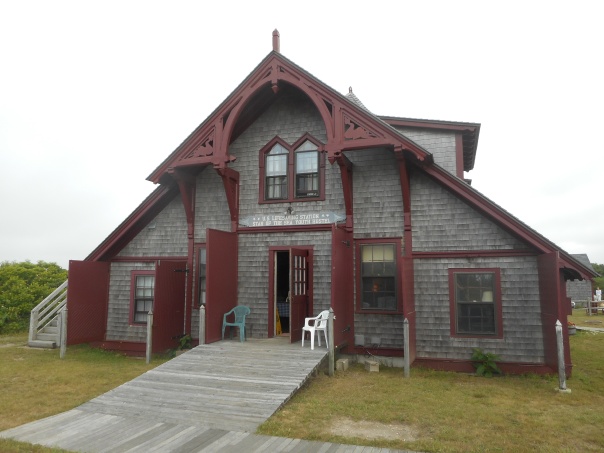 The former Surf Lifesaving Station in Surfside. No longer used for saving lives, the station has been converted into a youth hostel. 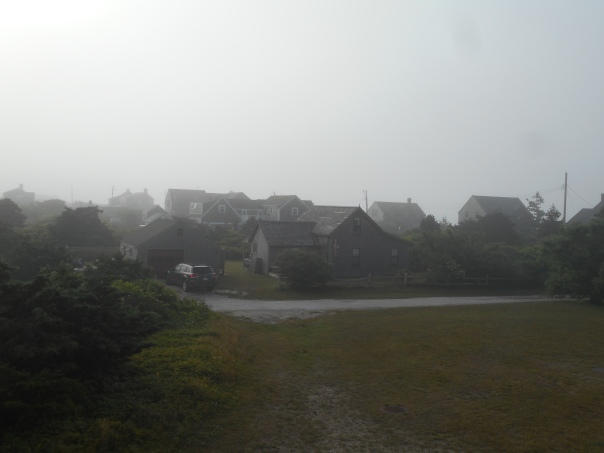 The southernmost settlement on Nantucket, the small burg of Surfside, often covered in the misty morning ocean fog that shrouds the Grey Lady