As the Coronavirus pandemic has upended nearly everyone’s lives from the old normal, I too have found my projected course of life disrupted. My planned employment for this spring—teaching environmental education and canoeing with schoolchildren in California—has been cancelled out of concern for spreading the virus. Fortunately, just as shoppers were starting to panic-buy toilet paper en masse and wiping supermarket shelves clean, I was able to snag a seasonal job at my local Meijer grocery store as a stockperson. Maybe it is due to my penchant for organization and my affinity for boxes, or maybe its my curiosity at how the modern food system works, but secretly deep down I had always been intrigued about working at a grocery store. Having done the job for a while now, I’ve found that stocking shelves of food product isn’t too complex, and the entire process can actually be quite meditative and satisfying at times (aside from the frequent waves of aggressive shoppers). So, with much of my mental capacity free to wander, and being in-store for 40 hours a week, I’ve turned my recent attention to more academic pursuits—that is, I’ve been trying to discern patterns in the background music being pumped-in through the intercom at Meijer.

It has long been known that music affects peoples’ moods. More recently, psychologists have undertaken studies to see how music affects behavior, particularly the behavior of customers in retail stores. For example, scientists have found that slower-paced music causes shoppers to move and browse more slowly, ultimately leading them to purchase more items. In contrast, faster-paced songs and songs that are familiar to the customer will cause shoppers to pick up their pace and spend less time in-store—items will be selected more quickly, but not as many items will be purchased. And what about streaming in some high-brow classical music? In contrast to pop music, playing classical in-store causes people to buy more expensive products. The amazing thing about this ambient background music is that shoppers often don’t draw it into their focused attention—the music enters the brain at the subconscious level and affects the shopper’s mood and spending behavior without their active awareness. Think about that the next time you’re getting groceries.

My conscious attention has been focused on the music played in Meijer, and having spent five weeks working there already, (which equates to about 200 hours of listening to their playlist), I’ve tried my best to discern any type of pattern or underlying psychological agenda I can pick out from their musical selection. The only conclusion I’ve come to is that the reassuring voice of Dr. Norman Beauchamp of Michigan State University, Executive Vice-President for Health Sciences, comes over the intercom on the hour, plus at 15-, 30-, and 45-past as well. In his most appropriately midwestern inflection ever, Dr, Beauchamp’s voice slips into our subconscious, reminding us to wash our hands often, and please, don’t touch your face. 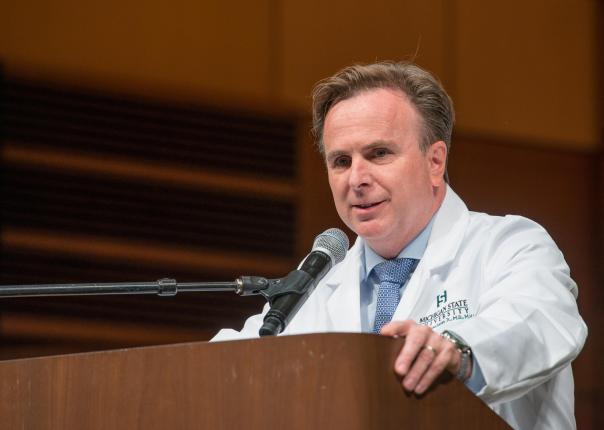 In the words of Dr. Norman Beauchamp, “wash hands often, or use hand sanitizer”

Even though Dr. Beauchamp repeats himself often to drive home his message of public health, the songs at Meijer don’t, at least not in an eight-hour shift. Though I’m almost guaranteed to hear a certain set of songs each workday, the time of day each song gets played is still a daily surprise. There is no discernible song order, and some tunes are played frequently while others only on a rare occasion (when the exceedingly rare Brandi Carlile or Pearl Jam song comes on, I pause and think to myself, ‘hmm, this is quite atypical’). As to the customer behavior that corporate Meijer is trying to achieve with its musical selection, I am still baffled. the musical genres that are played seem to run the gamut.  Here I’ll just give a brief survey with a few musical highlights of the sonic diversity experienced at Meijer.

The first few songs I actively noticed while working were because they were throwbacks to the summer of 2006, the year I turned sixteen and would sing out while driving by myself. Songs like Smash Mouth’s “Story of My Life” and Hoobastank’s “The Reason” have weathered the test of time a fair bit better, but Ashlee Simpsons’ “Invisible” and Saving Jane’s “Girl Next Door” have been left behind in the mid-2000’s, well, except at Meijer.

Of course Meijer would be remiss if they only played mid-2000’s pop without also playing some bad contemporary pop songs as well. Selections like “Perfect” by One Direction, “Tattoo (How ‘Bout You)” by In Real Life, “Love Yourself” by Justin Bieber, and “Hey Look Ma, I Made It” by Panic! At the Disco are the more recent earworms I unfortunately can’t get out of my head.

While the soundtrack at Meijer is primarily pop and light rock, R&B and Hip Hop get a little shake as well. Vanessa Hudgens sings “Come Back to Me” (talk about more mid-2000’s hits!) and Montell Jordan sings “This Is How We Do It” for a 90’s throwback.

And even Reggae fans aren’t even left out of the mix. Though infrequent, listen closely and you might hear a tune like Bob Marley’s “Could You Be Loved.”

Stores want customers to be in a happy, upbeat mood to increase consumer-spending. So it should be no surprise that Meijer pumps in upbeat feel good songs like Johnny Nash’s “I Can See Clearly Now,” and Billy Joel’s “The River of Dreams” every single day.

Does love cause people to buy things? Meijer must think so, judging by the vast amount of love songs they play in-store. They seem to particularly favor slow, sappy love ballads and duets, like A Great Big World and Christina Aguilera’s “Say Something,” Lady Gaga and Bradley Cooper’s “Shallow” or Landon Pigg’s “Falling In Love At A Coffee Shop.”

If slow love songs aren’t your thing, it won’t be too long before you’ll hear an 80’s synth pop ballad to pick up the mood and to make one reminisce about the days of hair bands. I am probably most intrigued as to why Dead or Alive’s “Brand New Lover” is on the playlist. Though upbeat and catchy, the lyrics do describe wanting to have an affair. Another song I still haven’t figured out what mood Meijer is trying for is Pet Shop Boys’ “West End Girls.”

In the mood for more 80’s? You’re in luck at Meijer. For an upbeat hit with an impossible number of key changes, try Sheena Easton’s “My Baby Takes the Morning Train.” I love this song every time, except when I’m just groggily starting work at 6am. Can’t get enough of key changes? You’ll eventually hear Michael Jackson’s “Man in the Mirror” too.

And if you get the impression that Meijer’s musical selection is only poppy and mainstream, just keep listening and you’ll hear an occasional song from the alternative music scene. Examples include Primitive Radio Gods’ “Standing Outside a Broken Phone Booth with Money in My Hand,” and a very quirky “Istanbul (Not Constantinople)” by They Might Be Giants.

It seems like the corporate music engineers at Meijer have me stumped. I can’t discern any subliminal messaging behind the song selection. Take a listen and see if you can find a pattern in this musical survey, and the next time you’re in a supermarket, stop and listen to the audio overhead.