← In All Directions
Pick a Direction and Go with It →

G’day mates. Greetings from the land of Oz! It’s October in Australia, which means that it’s springtime here. It’s been warm and mostly sunny, and the vegetation here makes Australia seem like a subtropical paradise. Just wanted to make those of you in the cold northern reaches envious J.

By now I’ve been in Australia for about 72 hours, even though I’m now four days ahead of when I left the States. It’s that whole ‘crossing the international date line’ thing that made an entire day disappear, and I’m still wrapping my mind around how I’m sort of living a day ahead of friends and family back home. Eastern Australia is 15 hours ahead of the Eastern Time Zone in the States, so when I’m saying G’day, you’ll be saying Goodnight.

By now I’ve had my first impressions—of Australia and of setting up life in another country. As my first step on this journey, I flew into the port city of Sydney, to serve as my getting-started hub. As Australia’s largest city and a world city in its own right, Sydney has a population of 4.3 million, which equals an astonishing 18 percent of all Australians. It’s mind-boggling to think that nearly one out of five Australians lives in Sydney (as a comparison, only 1 out of 40 Americans lives in New York City). And yet the city feels much smaller and laid back than its size would suggest. It’s been a great city to explore on foot for its walkability and many parks scattered throughout the city. Because my flight arrived early Wednesday morning, I had to wait a few hours before my room in my hostel was ready. To kill time I took a little walk down the street my hostel was on. And what did I know? All of a sudden I found some of Sydney’s most renowned treasures:

By this point a few days after arrival, the thought of being in a foreign country has become less salient (and actually, that transition only took a few hours). Sure some things still remain different, like the Australian accents and having to watch for traffic coming from the left side of the road. But by and far, the ease of transition seems to come from the similarity of American and Australian cultures. My first on-the-ground familiarization with Australia came from taking a shuttle bus to my hostel in Sydney’s central business district (CBD) from the airport (and I got to ride shotgun in the Australian bus, which is the same position as the driver’s seat in America). The route to Sydney’s CBD took us past Sydney’s many suburbs which look all too much like American suburbs. That kind of suburban sprawl development is one of the things I most disdain about the American geography, and in getting to the CBD we drove past blocks of strip mall develop and chain stores, including many McDonalds, Subways, and KFCs. I grew a bit apprehensive that Sydney and Australia would be too familiar to places I’ve known in the States, making this journey less of a novel experience. For sure there is a degree of pervasiveness of American culture here (most notably the fast food joints), but once we got to the CBD, Sydney began to feel like a city unique to itself. I’d describe it as similar to a west coast North American city, but special in its own right. Sydney has a bit of the climate and fun-loving attitude of San Diego; the new feel, clean architecture, and demographics of Vancouver BC; and the iconic attractions of San Francisco. 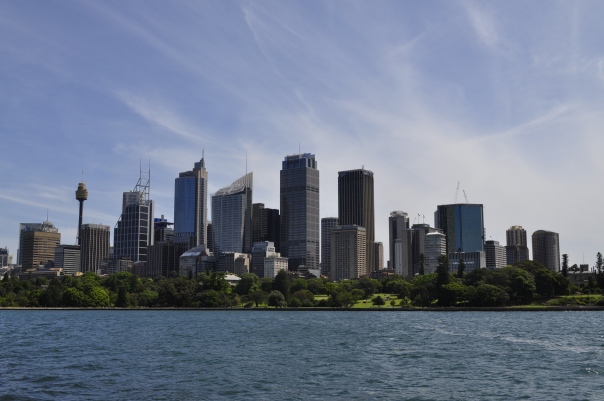 My quick transition to life in Australia also stems from the ease of getting started down under. The past few days I’ve been working on all the trappings of setting up a working life in Australia. Much like the Australians I met previously in America had ensured me, it is extremely easy to do. Almost too easy, in fact, sort of like it’s not challenging enough. My Australian phone number, Australian bank account, and Australian tax file number were all set up with the courteous help of the Aussies. They are quite kind to the foreign visitor, and Sydney is a vibrant mix of different nationalities and cultures. Apparently, spotting an American is not as common though, as the tourist demographic is highly skewed to Europeans. I happen to share a hostel room with 7 English, and I’ve also met a handful of French and Germans too. The biggest challenge ahead of me now seems to be securing an actual job that I’d like to do.

Soon I’ll commence on my plans to see Australia outside of Sydney. Though the city is great, busy, and bustling with energy, I’m searching for a different pace of life and a different Australian Geography. All that’s left to do is find an agricultural job and pick up my own set of wheels (my own campervan, hopefully), and I’ll set out into the Australian countryside and get to know rural Oz.

Posted on October 30, 2015, in Travel. Bookmark the permalink. Leave a comment.

← In All Directions
Pick a Direction and Go with It →