Life in a Migrant Worker Camp 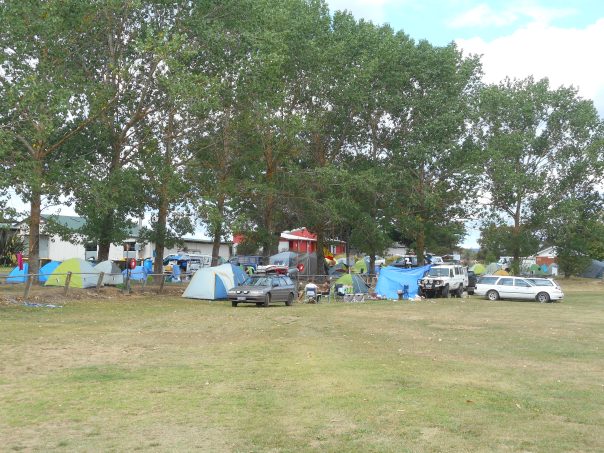 My alarm goes off at 4:45 am. I don’t need to get up that early. I just like to be one of the first ones up before the flow of activity starts in earnest. Outside, the land remains dark, but twilight is imminent enough to walk around in the dim light unaided. The first streaks of crimson light have already appeared in the far reaches of the eastern sky. The sun will make its way above the horizon shortly.

I crawl out of my tent into the cool morning air for the start of another day. The cold from the night will linger still for a while longer. A few early risers mill about in the murky dawn. Rows of vans and tents line the fields of this makeshift migrant worker camp at the Orange Agricultural Showgrounds. Life in the backpacker camp is about to begin a new day.

Brushing off the sleepiness from my eyes, I slowly start stirring about, preparing my body for the day ahead. Sore, blistered fingers gingerly make their way down my second-hand button-up work shirt. A quick rinse of the face in the mobile restroom unit washes the remaining sleep out of my eyes.

I make the short walk from my tent to the backpacker kitchen, if the facility even deserves that moniker. The kitchen is located inside an open-air animal barn, the sign labelling the building’s use for ‘dairy goats’ has been temporarily taken down and now lays solemnly against the wall. In place of showground dairy goats, the backpacker’s makeshift kitchen has sprung up. An odd assortment of worn tables and mismatched chairs are scattered around the trampled dirt floor in what can only be described as the unwanted leftovers of a bankrupt thrift store. On the left hand side of the building sits the kitchen area—a row of second-hand refrigerators, a lone sink draining directly to the lawn outside, and a folding table filled with a hodge-podge of small appliances.

I brought my own bowl and spoon for breakfast. Around here, dishes face a grim future. Lying shattered on the floor amidst the cigarette butts, unwashed on a table for days on end, or disappeared without a trace. My morning breakfast consists of a cut-up banana and seven Weet-Bix biscuits with milk (or yogurt, if dumpster-diving in town has proved successful). A hearty breakfast like this has proven to keep me satiated for a full 12-hour day of cherry-picking, provided enough cherries are snacked upon during the day to keep energy levels topped off.

I wash my bowl in the sink and head back to my tent to change into my work boots. Activity at the camp has picked up considerably. Rank-and-file cherry pickers mill about. By now it is well past light enough to pick cherries. Around 5:30 am, the first contingent of workers departs the camp, going silently off to unknown orchards in the countryside. Soon I will follow in my own van to see what type of harvest is in store for the day.

Who knows what goes on during the day in this camp when most people are gone working? Those who spend their days on the Australian harvest trail are not cognizant of such endeavors.

For, harvest work can come all at once, or not at all. Those lucky enough to have work for the day eagerly take the opportunity to earn whatever money they can. Around here, money earned is used to finance an extended period of holiday in Australia. Those for whom work wasn’t available, the whole day remains for enjoyment. Thus, on any given day there is a lot of hanging around in camp. A soccer game may break out in the field. The make-shift will kitchen gradually fill in the afternoon with workers, watching a movie or playing cards.

A day of cherry picking can last only for the morning, or well into the evening. With the amount of work varying day to day based on any combination of the number of workers, amount of ripe cherries, and the weather conditions, the amount of harvest work available is always in flux. In any case, the workers will eventually return to their seasonal camp once more, where evening activities are much more conspicuous than the morning lull. The evening hours sees the camp kitchen full and boisterous. The upwards of 100 people living and working here are unwinding from their days and celebrating the night. Clusters of people are scattered about akin to the furniture. The handful of young Australian pickers sit on a couch drinking beers and alternating practice on a skateboard. A group of young but mature Germans stick quietly to themselves, making and eating their dinner in hushed tones. The French are the most prolific and animated demographic here. They cluster in large groups all over the kitchen area. Soon the French will start their nightly session of Goon Pong. It’s the game of choice at camp, played exactly like beer pong, but the beer being substituted for Goon—Goon being the Australian slang for any form of cheap alcohol. In this case, the Goon of choice is boxed wine, but taken out of the box so that the internal wineskin can be slung around person to person.

All signage put up by the Showgrounds administration, as well-intentioned as it was meant to be, is disregarded by the backpackers. The harvesters roll their own cigarettes and smoke in the kitchen under the no-smoking signs. The butts are discarded on the dirt floor in jest. Dishes are used and left dirty, and half-eaten food litters the tables when the distraction of drinking games becomes too much. Activity will continue long after the posted hours of 10pm, unless the neighbors across the street call management to shut things down

The camp kitchen at night is not the place for me. I make an easy dinner with the limited utensils and eat it among some even-tempered fellow harvesters I have meet during my time here. We relax, we talk smack, but under no circumstances do we talk about cherries. After a while of hanging out, it has come time for me to leave.

As I walk back to my spot on the edge of camp in the mottled lamplit dusk, cheers from the Goon Pong game erupt. Another game has just ended in an apparently spectacular fashion. I settle into my tent between 9 and 10 pm, tired from the day and in anticipation of better cherry picking the next morning. As I get comfortable under my blankets, I pull out my book to read. I’ll be dozing off in a matter of pages. Clamorous uproars continue to emanate from the camp kitchen, fading out of cognition as sleep encroaches upon my mind. The cool air of night begins to settle over the Showgrounds.

Posted on December 19, 2015, in Working Holiday Life. Bookmark the permalink. Leave a comment.