← Moving On…
A Working Request →

A Picture of Efficiency 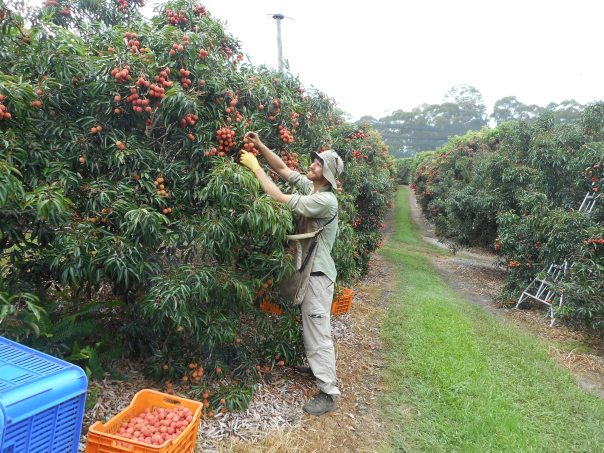 For compensation at Emperor’s Choice Lychee, I was paid an hourly rate rather than on a piece rate (i.e., payment according to the amount of fruit picked) like I was on the cherry farms. Though the physical tasks of picking lychee and cherries were not dissimilar, the method of compensation made a world of difference in terms of the work environment. I must admit that I enjoyed extremely getting paid a wage, for it guaranteed me a certain level of income no matter the circumstances of harvest. I’ll also add that the method of compensation made the lychee harvest an experience that will be hard to beat, and the cherry harvest an experience to be avoided.

The most immediate difference with getting paid an hourly wage is that the pace of work is quite a bit more stringent. Since my employer was obligated to compensate for every minute of his employees’ time, he needed to run a tight ship in order to keep his labour costs down. Thus, on our first day of work, each new employee got acquainted with the farmer’s employment philosophy; in his own words: “Guys, believe it or not, you’re not here to earn yourselves money. You’re here to make me a profit. And if you can’t do that, then we aren’t going to get along.” The farmer did make good on his promise—he would let go of underperforming workers at any point in the season. Thus, at Emperor’s Choice, you either worked efficiently or you needed to find somewhere else to work.

But it was never our employer’s goal to sack people. Rather, employees were a big investment for the farm since they are the workers who bring in all the fruit during harvest, leading to the farm’s annual profit. The job of harvest was to be done properly and correctly, to maximize yield and minimize fruit damage. At Emperor’s Choice, employing workers directly allowed the farmer maximum control over the performance of each harvester (this in opposition to piece work, where little to no training is given to new employees and workers are typically hired by contractors instead of farmers). As investments of the farmer, new workers were properly trained in all aspects of the harvest, and employee performance was monitored throughout the season. The goal of devoting such training to all variety of harvest tasks is to create a highly-skilled workforce who can achieve high performance with minimal supervision. The farmer also knows that creating a highly trained harvest team and compensating them fairly will lead to greater employee retention from season to season. Thus, a relationship develops between the employee and employer where the employer is more akin to a coach who aids in the development of the workers’ skill. The employee, then, is a player who gives their best performance season after season.

The result of our training and the stringent pace of work at Emperor’s Choice became a picture of efficiency. If you ever found yourself standing around for more than three seconds wondering what to do, you were wasting your time—and also your employer’s money. But this situation was mostly avoided, since us workers knew all the tasks that needed to be done at any given moment. Teamwork was most important in the packing shed, and it was also where our machine-like efficiency shone the brightest. The harvest workforce formed an economy of tasks based on proximity to a job or whoever needed a ‘micro-task’ (a job taking a few seconds, like emptying garbage bins or stacking picking crates) while they were waiting on something else. Thus all manner of tasks—large and small—were accomplished without too much thinking or too much being asked.  In the packing shed, workers with more skill and experience were assigned to lead up different processes, but common workers could be switched to a different task at any moment. Thus, workers were coached to have the flexibility and adaptability to fit in any part of the packing process. Since employees were very interchangeable in tasks assigned, it was thus understood that no harvest task was worth more or less than any other task (though I very well hope that some of the experienced veterans were getting paid more than me!).

When we all worked together for lychee harvest, it was quite impressive. Daily, the team of harvesters would pick and process over four metric tonnes of fruit with minimal direction from the farmer. It was a mutually cooperating environment, where we were able to celebrate with each at the end of the season for picking over 88,000 kilograms of lychee together. Being compensated on the hourly rate, there was no cut-throat competition for fruit to boost your own pay during the season. Instead, we created a positive and supportive work environment as we worked towards our communal goal, one in which we were all able to take pride in the farm operation and output.

I greatly enjoyed the change of getting paid an hourly wage. Though the workplace environment was very enjoyable, one of the downsides was that I remained uncertain of my job security throughout the entire season. Though I gave my best effort, I continued to feel uncertain if I was performing well enough to continue to be retained—especially compared to the most proficient harvesters. Such fears were heightened midseason after one worker was terminated for sub-par performance. When your performance is being closely scrutinized for efficiency, you can never be too certain if you might be the next to be let go. In contrast, job security is quite different on a piece rate; as long as you put in some effort, you’ll be retained as an employee—after all, you only get paid for the fruit you actually pick. Thus, if you want a break, go ahead—but you won’t get paid for the time you sit around smoking and eating your sandwiches in the orchard. Working on a piece rate allows one to pick leisurely and with less worry about losing the job.

Though job security is more certain on a piece rate, the biggest downside is that employers don’t respect employees’ time as they would if an hourly wage was used. For labourers on an hourly wage, the employer’s finances are respected by doing their jobs efficiently to reduce the cost of labour. This respect is reciprocated by the employer, because the employer is responsible for compensating employees’ time. An employer can assign employees to menial tasks, but remains aware that he must still fully compensate. On the contrary, the time of piece work labourers can easily be abused by an employer, because such workers are compensated based on fruit picked instead of based on hours worked. For examples of this on the cherry farms, my crew was sometimes assigned to orchard ‘clean up’. We were tasked with going back over trees that had already been picked to collect any fruit that had been missed. We, of course, still got paid by how many cherries we picked—but the problem was that there were hardly any cherries left on the trees. This led to an abysmal sum of money earned after a day’s work. Additionally, on one cherry farm the farmer would add extra tasks to the contract crew’s assignment; for example, we would be permitted only to pick cherries on the tops of the trees or we had to split clusters of cherries into single stems. These additional tasks required more time and reduced the amount of fruit we could pick in a day, though the rate of pay per amount picked remained the same. However, the cherry farmer didn’t have to pay for that extra time expended by the workers. I was informed later that this was done as a strategic decision to reduce labour costs in the packing shed.

Working on a piece rate always has the allure of a big payout if you become an exceptionally proficient fruit worker. As for me, I’d rather have my time respected as a worker and take the hourly rate. This decision isn’t based entirely on economics either, but on the workplace experience as a whole.

← Moving On…
A Working Request →