← From Pick to Pack: The Process of Lychee Harvest
A Picture of Efficiency → 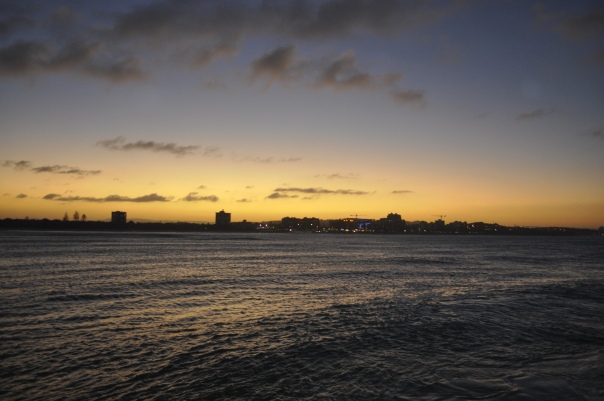 Sunset over the Sunshine Coast city of Mooloolaba

Tonight I sit reflectively on the spit as the sun sets, watching the distant foreshore of the Sunshine Coast as darkness falls and the city lights come on. Tonight is my last night here. Tomorrow I will move on.

Lychee harvest ended today. We had a celebration cookout under the veranda with all the workers, celebrating the achievements our labour accomplished. Afterwards we began our goodbyes to the crew we have known for a few short but intense weeks. “See you around,” say some as they leave the farm. “See you in Stanthorpe,” or “See you Tumbarumba” say others, gaily announcing their next planned destination, as if we expected to run into one another again. Joining the trend, I dismissed myself to the crew with “catch you in Batlow!”

But as I watch the sun set over the hinterland mountains, I contemplate why it is that I am moving on already. I didn’t even plan to be out here tonight—I had planned to stay inland to prepare for my upcoming departure. But something innate drove me to the coast. I just had to be here for one last night.

I have only been on the Sunshine Coast for a mere 31 days—longer than a visitor, but far short of being a local. I’ve just begun to know this strip of coastline and the lifestyle it affords. For a while, this place was my home. Why, I wonder sometimes, must I constantly be moving on right when I begin to know a place?

Australia, of course, is a different situation for me. Here I have no opportunity for permanency. I am no more than a long-term visitor, with a definite end-date for my time. My transiency is based out of the necessity of economics, continually chasing employment to support my holiday further. With immediate job opportunities on the Sunshine Coast having dried up, the promise of bountiful harvest labour now beckons me elsewhere. And too, I’ve created a busy itinerary for myself to see as much of Australia as I can—the breadth of my travels could not be reached if I do not continually move on. My own disinclination to linger beyond planned has left me a drifting traveller.

But I look onwards as the gleaming lights come on the high-rises above the beaches of Mooloolaba and Maroochydore. I wonder if I’d have the courage to deny my pre-conceived itinerary and continue to stay somewhere—merely because I enjoy the place. Would I brave enough to stop my relentless pursuit of places unknown (and potentially better) because here I have found something I’ve enjoyed?

I come from the generation sometimes characterized as ‘The Young and the Restless’. We move around easily from place to place, seeking localities suitable to our young, sociable lifestyles. No place is stayed at for too long if there is something better to be found. Myself, I always seem to be moving on from the places I have known out of a vital curiosity—an instinct—that there is something new, different, better out there to find. I feel convinced that if I stay too long in one place, I might not discover something else that fits me better. But I question my own logic. I’m too afraid to lose the illusory opportunity of something more promising that lies just beyond the world of the familiar.

I am one of a generation of cropped roots. Transiency describes my lifestyle, but I wonder why I always must be moving on.

← From Pick to Pack: The Process of Lychee Harvest
A Picture of Efficiency →