Experiences of a Lifetime 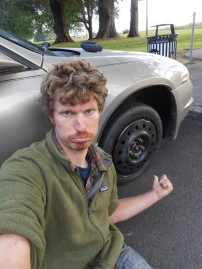 14 States, 2 Provinces, and 19,000 Miles of adventure and misadventure through the American and Canadian West (May-October 2015)

1,243 Miles of bike camping from Wisconsin to Michigan (September 2016) 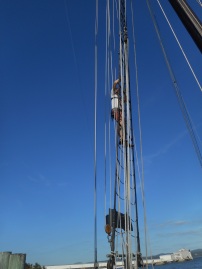 Working as crew aboard the 106-foot historic sailboat, the sloop Clearwater (September-December 2016)

Snapshots from a few ‘Experiences of a Lifetime’ I’ve already had, as determined by others.

Here I find myself about to embark on what many people would describe as an ‘experience of a lifetime.’

But by my estimates, in my one lifetime, I’ve already had at least five ‘experiences of a lifetime’ as determined by other folks. Most of those experiences have been trips I’ve taken. Some of them have even been paying jobs.

There is a typical conversation I’ll have with strangers who ask what I’m up to. This conversation goes like this:

Stranger: “What kind of trip are you doing?”

Me: “I’m canoeing the length of the Green River, through Wyoming, Colorado, and Utah. It’ll be about 700 miles and take 35 days.”

Stranger: “Wow…that sounds like an experience of a lifetime.”

When people learn about another person’s epic trip, it does seem to warrant a response of an appropriate scale. But often confounded about relevant things to say, these people will frequently fall back upon the old ‘experiences of a lifetime’ cliché. They mean well in saying it, though, as a way to be simultaneously wowed and encouraging.

When I think about past trips that I have been on, it would be disappointing for me to look forward and to know that I have already had my singular experience of a lifetime. And, if I’ve already had my one experience, then what more do I have to look forward to in life? None of my future endeavors could ever be as good. All I would be able to do is look back at my experience of a lifetime instead of looking forward to more adventures to come.

Fortunately enough, I have found it possible to have more than one ‘experience of a lifetime.’ And I’ve even got more in the works. Why do we so often limit ourselves to the thinking that we can only have a few adventures in life? Why not be able to make it a lifestyle? Why not collect ‘experiences of a lifetime?’

So that’s what I’m up to right now. Making a few experiences of a lifetime for myself…first by canoeing the Green River in September and October, and then by working as a dogsled musher in northern Minnesota afterward in the winter (and although mushing will be a way to pay the bills, people would still often consider that an ‘experience of a lifetime’ as well).

I will (ideally) post pictures and updates of the journey as I progress along the river. But, as you know, digital technology and wilderness are often not found in the same place. 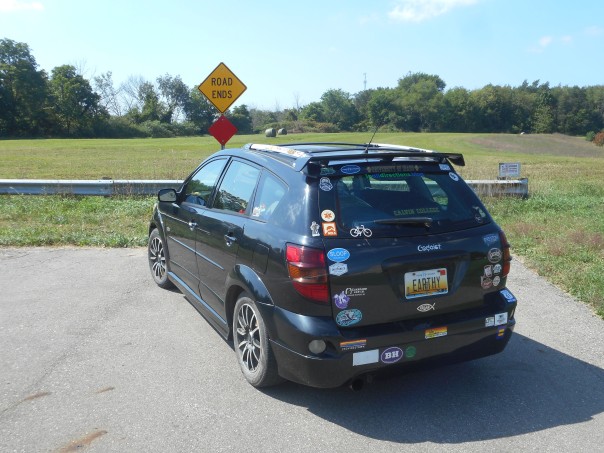 All packed and ready to go on another adventure where the road ends. Might even come back with some more stickers to showcase on the ‘experiences of a lifetime’ hatchback. 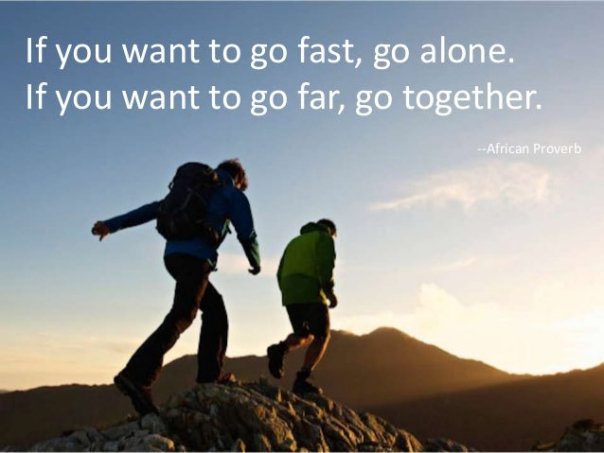 It used to be that when I read this old adage, I would favor and emphasize the going fast part of it. Though it may appear otherwise, the proverb doesn’t really offer up going fast and going far as two equal options to be chosen from; in the context it is most often used, there is an open bias towards uplifting as correct the latter as opposed to the former. But the choice is included in the proverb nonetheless, and fair being fair, one could, like me, focus on the benefits of going fast alone versus going far with others.

Most often I think of this proverb in its relation to travel. More specifically, recreational travel. My travel history is one of mostly solo ventures. I used to prefer it this way. I valued the independence of making my own choices. I valued the efficiency of being the only person to coordinate. I didn’t like having other people around to be forced to compromise with, as that might have infringed upon my personal travel desires. In that old perspective, traveling with other people either slowed me down unnecessarily, or forced me to participate in things which I didn’t really care about.

Even though I did favor the ‘fast’ side of the adage, I was never really a fast traveler on my own accord. At least in regards to speed. On my own personal trips, I usually, and predictably, fell further and further behind schedule. I like to take my time, though out of thoroughness and not out of leisure. Thus, I realized that I am a bit slower taking in the places I travel to, but I prefer the relaxed pace nonetheless. When traveling alone, I had the freedom to take all the time in the world to visit a place and not feel pressured to leave earlier because the people I was with got bored and wanted to move on (very true for visiting museums with me). Maybe the proverb should be changed to “if you want to go thoroughly, go alone.”

As a result of these preferences, I took many long trips by myself attempting to see it all, and to see it all thoroughly. I wanted the freedom and independence of travel to be able to follow my own whims instead of making compromises with the desires of other people. My little solo travels gradually got longer and longer until they culminated in my six months spent dirtbagging down under. Australia was a solo venture, and even though in Australian backpacking culture solo travelers frequently coalesce together, the longest time I ever traveled with someone was four days. And I was glad to be rid of him by the time we parted.

But during that time in Australia, my outlook on long solo travels began to change. On the whole, because I was traveling primarily by myself, I don’t think I got as much out of the entire Australian experience as I could, or even should, have. Sure, I did end up seeing more places than the average Aussie backpacker. But in reality, that additional travel looked similar to this: drive alone to a cool place on the map; get out of the van; walk around said cool place; think about all the cool stuff you could be doing in said cool place; do nothing because you have no one to do cool stuff with; repeat. In addition, I just eventually reached a mental space where I began to feel a little bored of keeping myself company all the time.

I began to realize that my preferred style of travel—solo—may have been leaving me short of the deeper gains of journeying. The going ‘far’ part. Reflecting on the most memorable trips I’ve ever taken, I realize that all of them were with people. And on my solo travels, encounters with other people—you know, those really-inefficient, freedom-compromising, dissimilar-interest kind of other people—were usually the most memorable moments.

But it is still hard to deny the benefits of traveling alone—speed and efficiency. I mean, much of my solo travels have been done simply because making solo travel plans is so quick and easy. On solo travels, you only have to consult with yourself. And you don’t have to see if your schedules align with other peoples’, or check in about travel styles or activity preferences. For solo travel you don’t have to wait to find other people to join you either. Seriously, I feel like half the stuff I’ve done in my life I wouldn’t have gotten to do if I had been waiting for people to join me. So, in some respects I have done a great amount of solo traveling and exploring simply because it is so efficient. But, the most memorable trips have always been with people when the inefficiencies and mishaps abound.

Traveling with others, as I’ve found, is a much richer experience. Since other people are just different from you, naturally, they will bring you to unexpected places and force you to do things that you wouldn’t have otherwise chosen for yourself. And, surprisingly, you will appreciate it. For the diversity. For the different perspective. For the opportunity to try something new. Because, traveling with other people is a surefire way to get exposed to a lot more cool stuff than you would have found on your own. Not to mention, you’ll have those memories and experiences to process and reflect on together.

With my increasing value on group travel, I’ve got a whole slew of upcoming adventures planned, all with people. A 300-mile bike trip along Lake Superior’s North Shore with a friend from college. A 700-mile canoe trip on the Green River with a spattering of friends and family along the way. And not to mention a whole summer of guiding canoe and backpack trips for summer campers.

When I think about my change in perspective concerning the different modes of travel, what often comes to mind is the scene near the culmination of the film Into the Wild, where Christopher McCandless sits emaciated and alone in his bus in the Alaskan bush, reflecting on his solo venture of surviving in the Alaskan wilds while coming to the sad realization that happiness is only real when shared, and that he will (SPOILER ALERT!) slowly starve to death by himself in an abandoned bus. It’s a true story with a heartbreaking ending about an idealistic young man who valued extreme independence in adventure a little too highly. And all at once but much too late young McCandless realized that real happiness lay with sharing the journey with others. Fortunately I’m not as extreme as McCandless. Some lessons I can learn second-hand.

So perhaps we should change the proverb. “If you want to see a lot of stuff thoroughly, travel alone. If you want to create a memorable and fulfilling experience, travel together.” But, that doesn’t quite roll off the tongue as easily.