← Ghosts of Port Arthur
The Graduate →

This is my first blog post back in the United States. Yes, that means my Australian adventure has ended. What I initially intended to be a year or more of work and holiday in Australia concluded after spending a comparatively short 187 days in the country.

In an earlier blog post, I summarized an outline of the itinerary I had conceived for Australia. It was an ambitious plan for sure—my goal was to drive around the whole country and experience all the best that Australia had to offer. Seeing how this trip would be my only working holiday visa in Australia (and in all probability my only visit Down Under), I wanted to make the most of it. With the naïve idea that I’d be able to see everything worth seeing in Australia, I calculated a very thorough travel schedule so that I wouldn’t have to bother coming back to the country. After all, it was a long 15 hour flight from Los Angeles to Sydney just to get to Australia. Below is a map of what I originally envisioned for my year+ Down Under: 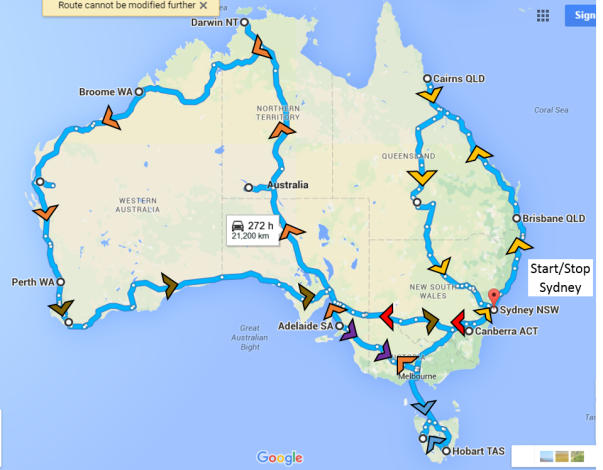 Needless to say, things didn’t work out very much as planned. Good, equitable work was difficult to find; shady fruit picking contractors swindled me out of a good chunk of my meager earnings; and my campervan experienced breakdown after breakdown. The accumulation of adverse experiences in Australia eventually led me to abandon the working holiday dream altogether. Though fate didn’t seem to be on my side, I don’t regret the journey at all and felt like I learned many invaluable lessons that I couldn’t have learned otherwise. Practically, though, as a major consequence of the essential unpredictability of eking out an existence in a foreign land, my idealized Australian itinerary changed drastically. Here is a summary map of where I actually traveled:

Probably the most noticeable difference between my idealized itinerary and my actual itinerary is the extent of the travels. Though I put over 15,000km on my campervan, I still only covered a fraction of the Australian continent. Major destinations like Queensland’s tropical north and the Outback’s red center were never reached. Travels to Western Australia and the Northern Territory were scrapped from the plan entirely.

Though I am disappointed at not being able to see such remarkable places, I’m not distraught over the lost opportunity. In conversations about my Australian trip, people often remarked that my journey was a ‘once-in-a-lifetime opportunity’. And, while making my plans for Australia, I took that sentiment to heart. I preconceivingly figured that I would never travel to Australia again—that this particular Australian trip would be my only chance to see places of world heritage value like the Great Barrier Reef or the Outback. Thus, I wanted to make sure I uncovered every stone Australia had to offer, so I could forever check the continent off my bucket list.

Abrasive reality—and sheer practicality—saw through my meager attempt to see everything in Australia. It is an impossibility to overturn every stone and leave nothing new to see in a country. Even if someone were to visit every square meter of a place, they would still have more to discover in the nooks and crannies. Such a person would still need to see the same things again, but from a different angle. Such a person would still need to spend more time in the country just to understand how the incessant elements of time and change affect a place. Fully seeing everything a country has to offer as a visitor is an absurd notion indeed.

As it so happened, I left many stones unturned in Australia. Though I wish I could have stayed longer and traveled more, I’m happy to say that I still have many reasons to go back to Australia in the future. Though I have no definite plans to revisit, I can see scenarios of returning soon to my much favored Hobart town for graduate school, or of returning only after many decades have passed as a grey-haired tourist. It’s also quite possible that I may never return to Australia again. But one things for sure: I never want to think of my stay in Australia as only a ‘once-in-a-lifetime’ opportunity.

Posted on May 12, 2016, in Place, Travel, Working Holiday Life and tagged Australia, Itinerary. Bookmark the permalink. Leave a comment.

← Ghosts of Port Arthur
The Graduate →