Recently I took a journey to see the ruins of Australia’s most renowned convict site, the penal camp at Port Arthur, Tasmania. Looming sandstone ruins lie sullenly at the site; their walls remain silent yet beckon the visitor to come closer. Port Arthur is rumoured to be decidedly haunted. On a gloomy day, one can nearly hear whispers from the horrors of convict transportation. Upon reforms of the penal system, transportation of British convicts to Van Diemen’s Land (modern Tasmaina) ceased in 1853, and Port Arthur finally closed as a penal site in 1877. Soon after its closure, Port Arthur became a tourist attraction for those curious to learn about the depravities of humanity that occurred there.

The ruins of Port Arthur, Tasmania

The oldest buildings at the Port Arthur site date from the mid-1800’s. Today these old sandstone edifices stand as hollow shells after bushfires gutted the buildings post-abandonment. However, one modern building on site also stands as a hollow shell—a memorial to another dark time in the Australian nation’s past. This building is the Broad Arrow Café, the site of Australia’s worst mass shooting in national history. On April 28, 1996, a lone gunman walked into the café and opened fire, initially killing 20 victims in a shooting spree that would go on to take the lives of 35 and injure dozens more. 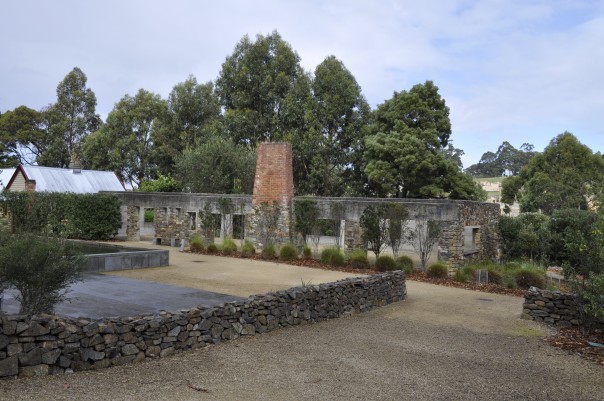 I was alive when the Port Arthur massacre took place. I was five years old at the time, older than the youngest victim, but too young to understand even if I had known what had happened. In no way do I have personal connections to the Port Arthur site—yet I still felt drawn to the memorial as a sacred pilgrimage. As an American, I am a citizen of a country that knows gun violence too intimately. I can’t help but feel sympathy for those whose lives are devastated from senseless violence. Akin to a stranger mournfully walking through an unfamiliar cemetery, I felt the need to pay my respect to those who had died in the Port Arthur tragedy and, symbolically, to others in similar incidents around the world.

Only a few weeks into my travels in Australia, America once again faced the consequences of another mass shooting. December 2, 2015, San Bernardino, California. The news broke from the TV in the hostel I was staying in. Though I don’t even watch television, I couldn’t pull myself away. Before San Bernardino, I had always stayed informed on the all-too-many mass shootings in America. But this time I was watching from abroad. I had become a distant observer behind a glass panel. Witnessing the events from abroad, I couldn’t help the overflowing sadness of lament for my country, a land that allows such tragedies to happen continually. I felt angry at the ineffectiveness of any sort of reform that would unite my country to curb the violence. That morning I shed a tear of sorrow for my country.

I visited the Broad Arrow Café at Port Arthur thinking that I’d learn a lesson on how one nation responded in a unifying manner to prevent future tragedies from happening. But gun control lessons weren’t the point of the memorial. The empty shell of the café is rather a somber place to mourn for those 35 taken. It’s a touchstone for reflection.

In matters of gun violence, the difference between Australia and America is that one country was united enough by tragedy to act. In the wake of the 1996 massacre, strict, nationwide gun control laws were passed—semi-automatic assault weapons were banned, a nation-wide gun registry was implemented, and gun buy-backs were held. Australia soon developed one of the most regulated gun markets in the world. As a result of the reforms, gun violence in Australia plummeted drastically. A telling sign of the effectiveness of one country’s reaction is that no mass-shootings on the scale of the Port Arthur Massacre has occurred in Australia since.

On Sunday 28 April 1996, the Port Arthur Historic Site was the site of a devastating violent crime.

In this area, and at other locations nearby, a single gunman killed 35 people and injured dozens more. Staff from the Historic Site were among the victims. Twenty people died inside this building.

Immediately after the shootings, there were many acts of bravery and compassion around the site, as rescuers tended the injured, not knowing whether the gunman was still in the area.

The man was captured next day, not far from the Port Arthur Historic Site. He was tried, found guilty and sentenced for life with no eligibility for parole.

The crime, which was reported around the world, caused widespread shock, outrage and grief. Many people still suffer as a result of the events of 28 April 1996.

It was agreed that a memorial garden, incorporating the shell of the Broad Arrow Café, would be established as a place of quiet beauty and calm reflection.

Open to the wind, rain and sky, this peaceful garden and these bare walls are touchstones for people’s thoughts about what happened here.