A Week on the Rock: Restoration Volunteer at the Rock of Ages Lighthouse

Northwestern Lake Superior, May 27, 1933, 6pm—The passenger steamer George M. Cox plies briskly through the frigid waters at full steam ahead, despite a heavy fog having settled over Lake Superior. On her maiden voyage after an elegant and expensive refit financed by New Orleans businessman George Cox, the Cox is bound for Port Arthur, Ontario carrying a load of 127 prominent guests, passengers, and crew. The captain and owner of the Cox need her to make good time on this voyage in order to impress her passengers and to show the Cox’s viability against other steamer lines in the lucrative vacation travel business. In the heavy fog enveloping the lake, Captain Johnson and First Mate Kronk can hear the fog signal from the Rock of Ages Lighthouse—they know they are near Isle Royale, but continue onward at 17 knots. Suddenly—a jarring jolt and the sound of scrapping metal. The George M. Cox runs full speed into the Rock of Ages Shoal, lifting 110 feet of her bow out of the water and giving her a dangerous list to port. The command to abandon ship is immediate. 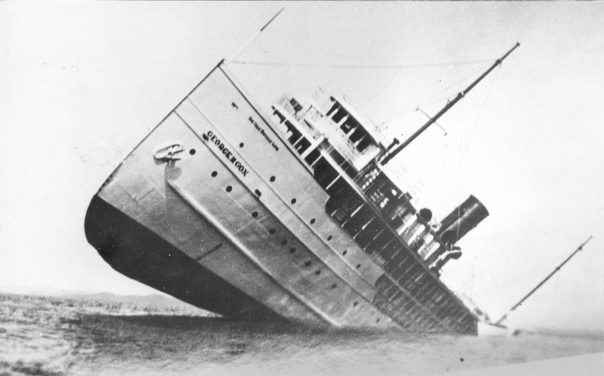 The wreck of the George M. Cox (image from Ampers)

On watch from the Rock of Ages Lighthouse, head keeper John Soldenski hears the crash and lowers the rescue boat to race off to the scene of the wreck. Though the wreck of the Cox was spectacular, there were no major injuries and Soldenski is able to tow all the life rafts safely to the lighthouse. At this cylindrical lighthouse on an isolated rock outcropping no bigger than 50 by 200 feet, all 127 passengers and crew onboard the Cox would spend a bitter and cramped night. The rescued crammed into the spiral stairwells of the Rock of Ages, or alternatively took turns huddled against the cold on the rock itself to avoid the overcrowding. The next day, rescue ships removed all George M. Cox passengers and crew with minimal injuries sustained and no loss of life in the wreck and subsequent rescue. As for the Cox herself, insurance declared her a total loss and she sat beached on the reef for months. She became a tourist attraction in her own right, and local Isle Royale fishermen brave enough to enter found many luxury goods to plunder. October storms later that year broke the Cox in two, and she slipped quietly to the depths of Lake Superior.

Despite this history of heroism and lore of rescue on the high seas, technological advancements and automation eventually led to the end of the keeper era at Rock of Ages. In 1978, the light was automated and the final keepers said their goodbyes. The lighthouse itself was prepped for its abandonment—windows were filled in with cinder blocks, doors and fixtures were removed, and all the interiors were coated with semi-gloss white paint—even the remaining light bulbs. In 1985, Rock of Ages’ magnificent 2nd order Fresnel lens—a lens that allowed a flame to shine for 29 miles—was removed and replaced with a much smaller solar-powered lantern. The door to the lighthouse was locked. The magnificent beacon that is the Rock of Ages was left to weather the elements alone. 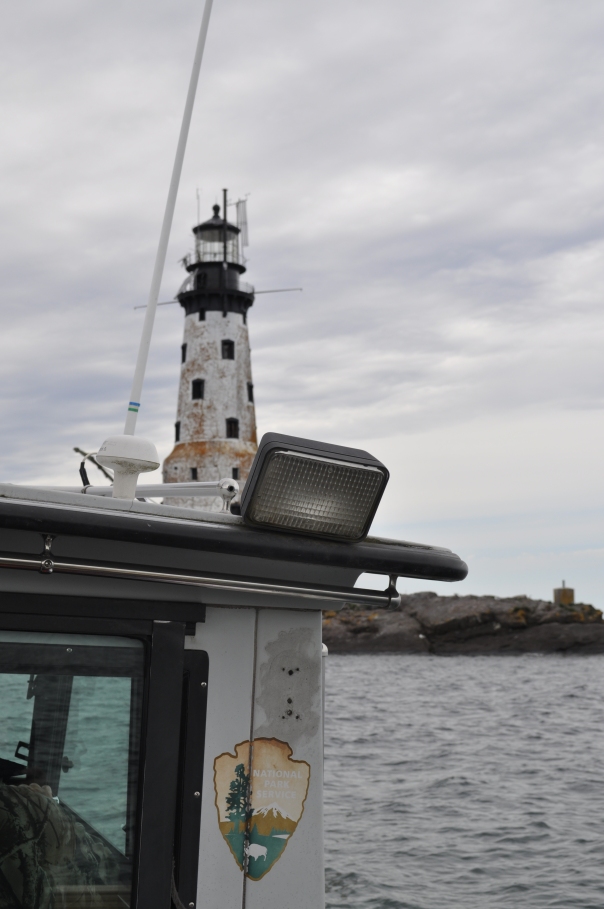 Getting dropped off for the week

The crew was led by two-time lighthouse volunteers, the Nebraska couple Josh and Heather: odd-job experts, and woodcraft miracle workers. Joining them were me and Dakota Dirk, a professional historical restoration carpenter from Minnesota and an avid collector of antique oddities. For five nights, we stayed at the Rock of Ages itself. Our project goal for the week was to finish installing the 3rd floor hardwood flooring and to install window, door, and baseboard trim on the 3rd floor galley and the 4th floor keepers’ quarters. I would be staying in the unfinished 5th floor assistant keepers’ quarters.

My room in the unrestored 5th floor assistant keepers quarters

The Rock of Ages Lighthouse is located more than 20 miles off the North Shore of Minnesota, and another five miles southwest of the Windigo Visitors Center on Isle Royale National Park. Upon arriving at Windigo on our first day in service, we immediately took a smaller, former NPS patrol craft to the shoal on which the Rock of Ages sits. Seeing as how Lake Superior is rough and unpredictable, and how the lake has claimed many larger ships throughout the years, the length of our stay would be determined by when the weather was favorable to access the light. It is a situation still the same as the keepers of old; during the active years, the keepers’ tours of duty would be subject to the mercy of Lake Superior. Keepers could often be stranded for days or weeks until weather would allow a ship to remove them at the end of the season. One crew of keepers was down to a single can of tomatoes for provisions when they were finally removed from the lighthouse. Hopefully our restoration crew would not suffer the same fate; we packed plenty of extra peanut butter just in case.

At the dock on the Rock of Ages

Our first day on the Rock of Ages was spent exploring the place that would serve as our home base for the next five days. The rocky reef on which the Rock of Ages sits is a jagged piece of basalt that emerges from nowhere and drops precipitously off into the azure waters of Lake Superior. No wonder this place posed such an immanent threat to shipping traffic. The Rock of Ages Light was built to mitigate the hazards of this reef. Construction began in 1908, when workers blasted a 50-foot diameter hole in the rock down to water level, in which the foundation of the lighthouse would be laid. The first two levels of the lighthouse, encased in steel and concrete, were finished in 1908 and served as storage areas for the Light. Being at water level, these two levels were constantly battered by waves and exhibit a characteristic clammy dampness. The remaining eight levels of the Light were completed in 1909. The main floor of the lighthouse was the third level up, and contained the engine room. From there, the spiral staircase leads past the 2nd floor lounge and office, 3rd floor galley and mess hall, 4th and 5th floor keepers’ quarters, 6th floor watchroom, 7th floor service room, and finally the 8th floor lens room. A journey up the lighthouse’s 149 steps will take one past various unrestored levels with peeling paint and blocked-off windows, as well as a few freshly finished and yellow-hued rooms. From the panoramic views of the lens room, 117 feet up, one can look out on Lake Superior and see the buoys that mark the wreck of the ill-fated Cox, along with the 1877 wreck of the Cumberland and the 1898 wreck of the Henry Chisholm.

The base of Rock of Ages emerging from the rock 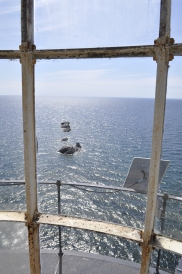 Rock of Ages Reef from the Lens Room

The 7th floor Service Room, or our dining room

Looking up into the now-empty lens room

Silhouette on the Rock

Our volunteer work focused on installing flooring and trim work in the 3rd and 4th floors. Restoration crews in prior weeks and years had previously demoed and painted these levels in order to make them habitable for work crews staying out at the lighthouse. Our job was to wrap things up by installing the finish trim. This was no simple task, as all our trim pieces were straight, and the entirety of the lighthouse is circular (not to mention that water damage and exposure had rotted out much of the underlying structural wood we were nailing into). Using a variety of construction techniques, some woodbending, lots of trial and error, and perhaps some voodoo magic, we as a crew were able to finish most of the trimwork on these floors. Adding the trimwork really tied the rooms together. And being period appropriate too, all the trimwork was a fancy compilation of early 1900’s-style solid oak. Despite being such an isolated lighthouse, the keepers at Rock of Ages were blessed with quite ornate woodwork. 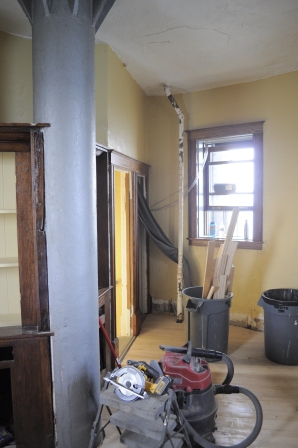 Josh and the crew installing the final piece of window trim

Even though the restoration crew put in long hours on the restoration project, there was still plenty of time to enjoy spending at the lighthouse itself. With so much restoration work actively going on, the lighthouse was a great place to play architecture sleuth. One of my favorite down-time activities was roaming the floors of the lighthouse trying to piece together its history—its construction, its changes, and its restoration. Hanging out in the lens room was the best location to feel the immensity of Rock of Ages’ isolation. To the east is a view of the entirety of Isle Royale; to the north is Minnesota’s North Shore and the Sleeping Giant of Ontario; to the south the endless expanse of Lake Superior. My favorite spots to watch the sunset were in the lens room and on the 7th floor catwalk. With favorable weather most of the week, we were always treated to spectacular sunsets and to watching seagulls fly in the wind. 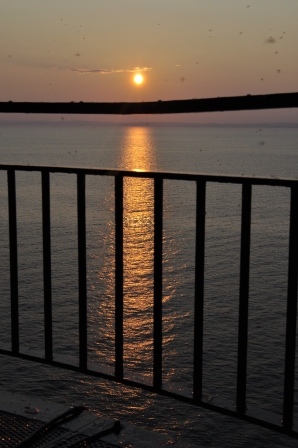 Sunset from the 7th Floor Catwalk

Sunset from the Lens Room

The modern-day solar-powered lens lighting up

Despite the lighthouse’s isolation, we had several visitors stop by throughout the week. Maintenance workers from NOAA stopped by to maintain weather equipment, and the National Park Service had groups of protection and maintenance rangers stop by. Our daily break was also timed around 2:20, when the Sea Hunter III would pass by with day-trippers to Isle Royale who all took pictures and waved. 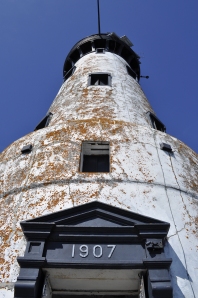 The Pediment of the main doors

The white stucco exterior of the lighthouse, coated in orange lichen 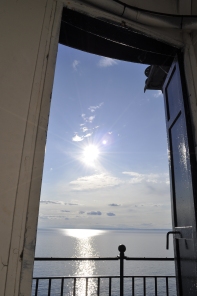 Sunshine on the Catwalk Door

Our friends also included the many seagulls who called the Rock of Ages home. Their calls intermingled with the wind to provide the constant background music of Rock of Ages. In high winds, from the lens room, we would watch as the seagulls had a heyday soaring in the breeze. There were also several fledgling seagulls born on the Rock that we watched in anticipation, waiting for their first flights down to the water. 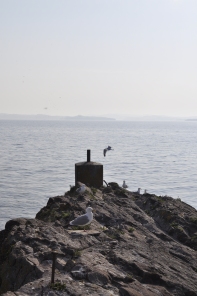 Our other constant friends were the midge flies. Every object outside the lighthouse was coated thickly with a layer of midge flies and other insects taking shelter from the constant wind. On the few occasions that the Lake Superior winds ceased to blow, the midges would take flight, forming an airborne swarm. I, as well as everyone else, inhaled too many midges to count.

At last, it came time to leave the Rock of Ages. The final two days of our volunteer period had thunderstorms in the forecast; we would need to leave the reef while we had a good weather window. Though I find it disappointing that we never experienced the extreme weather that the old-time keepers had experienced (with waves crashing up to at least the 6th floor ), it was a spectacular week on the Rock nonetheless. 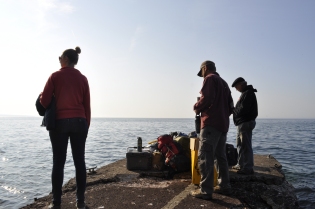 The Rock of Ages

Me and the Lighthouse