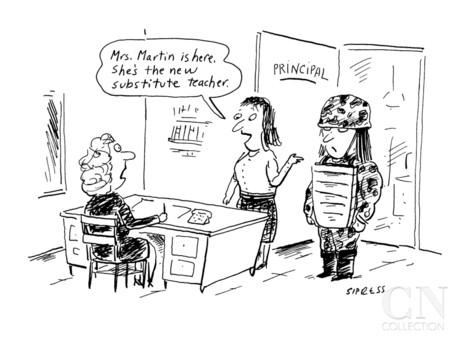 I’m not a certified teacher, nor do I have any training or classroom experience (but I won’t tell the the students this). The field is generally short-staffed, so any decently educated, mature adult can fit the bill. The work itself isn’t lucrative, and the pay isn’t too enticing either. Lots of us working this job are only doing it temporarily until something else comes along. And nothing irritates me quicker than having a student claim that I’m not a ‘real’ teacher.

I don’t know this school very well. In fact, I likely may have never been to this school before. So much of working this job is figuring things out on the fly—room locations, educational culture, school policies, etc.—and one of the best strategies is to find the nearby teachers who will be helpful throughout the day. In the classroom, much of the time I’m going to be relying on the students to ascertain whether I’m following classroom protocol correctly. And if I don’t do something exactly as your teacher does it—DEAL WITH IT!

I arrive at my assignment early enough to read over all the sub plans, always entering the classroom with a slight hint of dread upon the possibility that no material was left to teach in class. Though I may have read through all the plans ahead of time, I’m usually just a topic ahead of the class and I’ll use every spare moment to plan my next teaching move.

I often don’t know the material I’m teaching myself. I do know enough, however, to talk my way around things in order to give off the impression that I know. When I don’t know, I often ask for a student volunteer to do an example problem in front of the class—doing this might help jog my memory, but more importantly it makes the students feel more engaged in class.

I only have three sets of professional teaching clothes. I can get away with this because I’m usually never at the same school more than three days in a row.

I generally feel very appreciated by the school staff, even though often I don’t feel like I’ve done much in a day. I may not be a great teacher, but what’s more problematic for the school is having no responsible adults available to oversee the students. And at some schools, even making it through the entire day in the classroom is an accomplishment in itself.

My threats of punishment may very well just be empty. Since I don’t know enough about the punitive system at this school and where to send students for misbehavior, I often rely on the perception that a student will get punished as a method to gain cooperation. When I say I’ll leave names for the regular teacher about misbehavior, I make sure I do—but then I never know if the regular teacher ever does anything about it. When I do know where to send disruptive students, it is an incredible tool for classroom control. Sometimes all it takes to control a classroom is to remove one particularly disruptive student. At some schools, one of my initial tasks upon arrival is to learn how to call for security.

The teachers that the students fear most are often the teachers I fear as well. I’m not kidding when I tell the students that they don’t want Mrs. So-and-So to come into the classroom because she won’t be happy when she is forced to come in to chastise a deviant class. It’s not that I get scolded by the teacher for doing a bad job—it’s more like every time a teacher comes in to quiet my class, I feel like I’m not meeting the expectations of the substitute job.

I’m not just here to babysit. I’m here to teach, and I actually really love teaching too. Though much of my time is devoted to managing the behavior of the class, when I have a really engaged group of students, it makes up for the shortcomings of many bad days in a row.

I like it when students love me, but I think it’s often more fulfilling when they hate me. My goal isn’t to be the students’ friend, but if the students are mature, then I’ve found I can be more lenient as long as they are able to self-direct themselves to finish their work. If the students misbehave, though, I also like getting strict with them to the point where they clamor how their substitute is the worst one ever. When I hear that, I often feel accomplished for bringing some discipline to the classroom.

Sometimes I actually prefer the more difficult assignments. Sure, the suburbs can be nice and easy, and the kids can be very polite and well-behaved. But that gets really boring really quickly—those are more like the‘glorified babysitter’ assignments. At the other end of the spectrum are the really tough inner-city schools, where no one really ever has control of the classroom. I personally like the challenge of having a trying group of students with their myriad behavior issues, but only to the extent that their behavior is possible to be controlled. Not all days end up going well, and on those days where I fail I often get to learn more about how I could become a better substitute.

I also prefer working with younger grades—not necessarily because I enjoy younger students more, but because younger students need the teacher more. By the time students reach high school, they can pretty much take care of themselves. Younger students are often a squirrely handful, but I’d much rather have the day fly by with the many concerns young students bring to the teacher rather than spending the day being generally ignored by high schoolers.

I dislike showing videos in class. In fact, I often bemoan those assignments. Fortunately, I don’t show videos that often. Part of my dislike stems from having to watch the same video multiple times in a row—but more likely, I don’t like it because if the students aren’t interested in the topic, then making them watch a video leads to even more behavior issues difficult to control.

I can’t promise to remember everyone’s name. There’s only one of me, but there are 30 of you. And some of you may look similar to other students I’ve had before. I’ll try and pronounce you name right, but I’ve probably never heard of it before, nor will I understand how the letters in your name make certain sounds (like how ‘Aja’ is pronounced ‘Asia’). I feel bad for a lot of students based on their names—like the 7th grade girl named ‘Isis’. And with some names, like ‘Sir’ and ‘Everythang’, I have to hold back a chuckle while taking attendance. 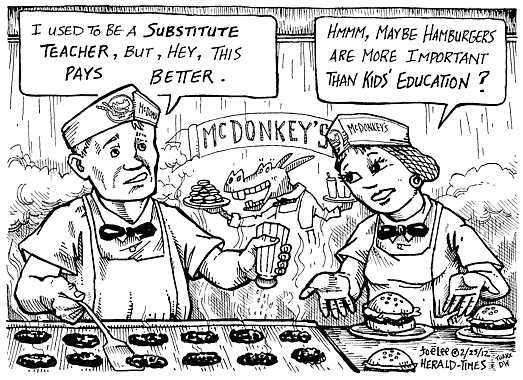 Posted on March 5, 2017, in Education and tagged substitute teacher. Bookmark the permalink. 2 Comments.