The Green River Epilogue: The Confluence 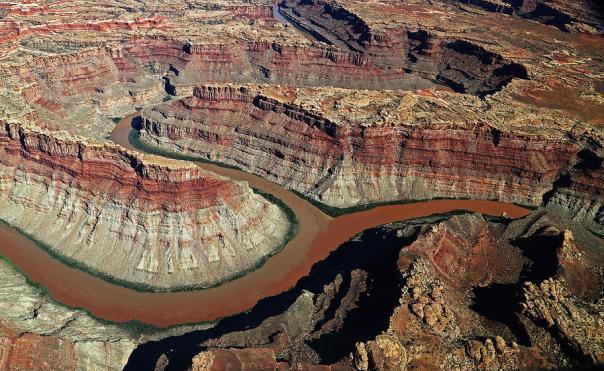 The confluence of the Green and the Colorado Rivers. (c) Jean Clark

One-hundred-and-twenty miles downstream of the town of Green River, Utah, past steep sandstone walls and through the winding labyrinth of canyons, the Green River finally reaches its terminus. Its silt-laden waters, wearing an opaque muddy brown-green veneer, run into the deep red hues of the Colorado River. The confluence is seen by few but the intrepid; it lies tucked in a maze of canyon walls, perfectly inaccessible, save for the adventuresome boater.

The confluence of the Green and the Colorado was a goal of mine to reach on my Green River expedition. What more natural ending place than where the river itself ends? After all, I had started the journey over 700 miles upriver, where the headwaters of the mighty Green become navigable. It only seemed appropriate to paddle the river to completion.

I didn’t make it to the confluence, however. I really didn’t expect to either, given the external time constraints that crept up upon the journey as I neared its commencement. Such an ending as the confluence would have made for a tidy, complete story to summarize the trip. It would have been easiest to say to others that I had paddled the entire river. Instead, reality and necessity broke the river into sections, and I found my paddle of the Green to be finished incomplete—65 miles left unpaddled near its rocky headwaters, 57 miles unpaddled through the raging rapids of Dinosaur National Monument, and the last 132 miles of flatwater from the end of Gray Canyon to the confluence.

In retrospect, it’s far too easy to look at those 254 miles that I didn’t paddle, and to think about all of the river I had missed along those untraveled stretches. What experiences were left unknown? It’s easy to let my mind focus in on what I didn’t accomplish during my expedition than to think about all I did accomplish. Twenty-eight days on the river and 463 miles of paddling is no small feat. That’s nearly two-thirds of the navigable river itself. It’s like traveling from Chicago to Pittsburgh with all of my possessions in one 14-foot long boat.

Even though I didn’t paddle down near as much of the river as I had anticipated or had dreamed about, I was, and still am, extremely satisfied with the length and the outcome of the trip. Regardless of the ultimate distance traveled, I had accomplished so many things on the journey. I had taken the opportunity to get out into the wilds and to explore some places unknown to me via reflective self-propelled travel. I had spent nights out in the backcountry alone and with the company of my Dad and my close friend Jon. I witnessed the gradual change in the landscape from the mountainous headwaters of the Wind River Range, through the high desert plains of Wyoming, and finally into the canyon country of Utah. I saw the brilliance of stars. I heard the call of wild animals.  I had immersed myself in the instantaneous reality of the elements, testing my endurance through weather both hot and cold, parched dry or rainy, high winds, dead calm, and even a snowstorm. My mental and emotional states were tested to endure the journey just the same as my physical state was tested to endure. And I accomplished all of this in just 463 miles. I didn’t even need all 717.

Despite never making it to the confluence as a natural geographic ending for the expedition, the trip itself, in my perspective, came to its very own well-suited ending. By the end of Desolation and Gray Canyons, I had had my fill of experiences and lessons from the river, and I felt perfectly ready to end the journey. Though I did not get to see the entire river, I walked away with so much of what the river had to offer, even over the shorter course of distance traveled.

Even though I am now off the river, the very water which I paddled on still continues downstream towards the ocean. Much of it has likely passed the confluence already. It’s a way to know that my direct experience with the very substance of the river itself is intricately tied to the greater watershed. The confluence will still be there years to come, just like the rivers have been flowing there for thousands of years. Someday I hope to return to see the confluence for myself.