← Gone to the Dogs
Glamour Snoots →

An item on many people’s bucket lists, including mine, is to visit every one of the fifty United States. It’s a large task, considering the vast size of our country…but then again, it’s not too challenging when one considers how large most states are and how merely transiting around this country will often result in unintended visits to new states and to new places. As for me, before I reached the age of 27 in 2017, I had already set foot in 48 states and the District of Columbia. Mapped out, it looks like I have visited most of our country: 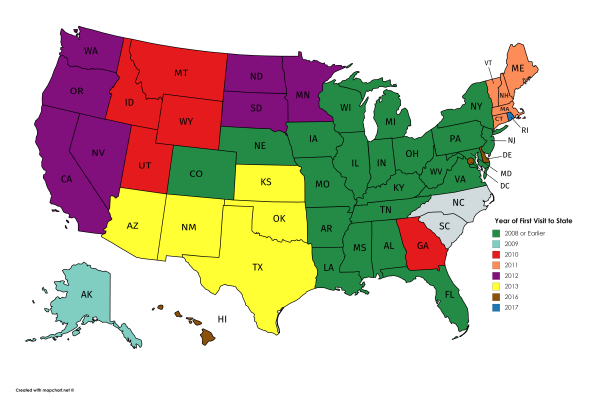 But for how many people, is visiting every single county in the United States on the bucket list? Instead of a mere 50 states, the total list extends to 3,142 counties*. For fellow alumnus of Calvin College’s Geography Department Tom Byker, this was a very intentional goal. Byker started his earnest quest to visit every single American county after beginning college, and this county-visit project was one highlight on his resume that helped him in landing a job at the navigational company TomTom. Tom recently brought his county visit project to a close after visiting his final county in Hawaii in 2017.

Inspired by the fine-scale travel goals of Tom Byker and the other ‘County Collectors,’ I decided to make my own map of county visits, mainly out of curiosity of where I’ve been in each state. I have never kept a formal list of counties that I have visited, so the entire map is based off memory of past travels I have been on. The majority of county travel has occurred during college and beyond, but I did try and reconstruct the county locations of some early family trips. And yes, I did count driving through a county as adequate for a visit. Here is what my county-scale map looks like: And what can I learn from the county-level map?

Maps generated are courtesy of mapchart.net

Here is the state-wide data on visits to each state:

← Gone to the Dogs
Glamour Snoots →